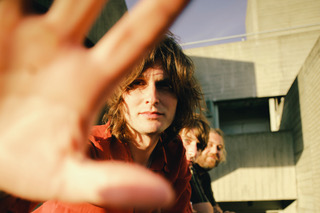 Welsh beauties TRAMPOLENE release a new song, Sort Me Out, on November 25th,taken from their much anticipated fourth album, Rules Of Love & War, which will be released through the Strap Originals label on 17th March ’23, Listen here https://lnk.fu.ga/trampolene_sortmeout-1 .   TRAMPOLENE will be performing Sort Me Out on Sky Sports’ fan favourite footie show, Soccer AM, this Saturday 25th November.

Sort Me Out is the second track (along with Thinking Again which featured in the BBC coverage of the World Cup) to be lifted from the forthcoming album Rules Of Love & War which features 12 new TRAMPOLENE original songs and was produced by Mike Moore (Baxter Dury/Liam Gallagher), Richard Jackson (Super Furry Animals) & Jason Stafford (Albion Rooms).

Says singer and boss Tramp Jack Jones: “Sort Me Out started as this slow desperate love song I wrote when I was 15.  I presented it to the boys recently, and they amped it up, sped it up, piled their life into it and it’s somehow turned into a bit of an indie anthem. Whenever we’ve played it live it seems to have brought the house down.”

Rules of Love & War will be available on CD, cassette, digital download and 12″ black or red vinyl, as well as exclusive formats and signed items. Preorder the album here: https://lnk.fu.ga/trampolene_rulesoflovewar

Fresh from opening and selling out the new Swansea Arena, TRAMPOLENE play a headline tour of the UK for April ’23 and six shows for Independent Venue Week in January and February. Tickets for all shows are available now from https://shops.ticketmasterpartners.com/trampolene & https://shops.ticketmasterpartners.com/trampolene-2023

The full dates are:

Jack Jones, lead singer/guitarist of TRAMPOLENE is a spoken word poet, singer and songwriter. He moonlights as lead guitarist in Peter Doherty’s band The Puta Madres. BBC Radio produced a documentary portrait of Jack Jones & TRAMPOLENE, entitled ‘Another Swansea Poet’ in 2019. Jack writes about everyday life, his upbringing, and offers his own social commentary on the world, all delivered with a gentle Swansea lilt. Wayne Thomas works in a pub in North London. Mr Williams teaches piano in Swansea.

Link to Artwork and Press photos: