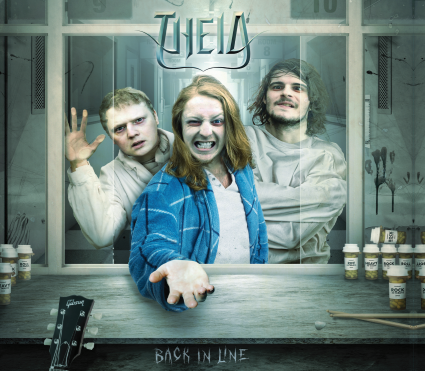 Hailing from the heart of England’s ale brewing capital, on the edge of the National Forest, Burton-on-Trent three-piece, THEIA, have harnessed the rugged terrain of the Peak District to bring the world their blend of hard rock n roll. It’s a classic rock feel for the modern era, played with a smile on it’s face.

Quote from the band about ‘Back In Line’:
“We’re so proud and excited to bring this album into people’s lives – simply because it’s been such a huge part of our own lives! Back In Line has brought about a big step up in our songwriting and storytelling process… it feels like this album is tearing its way out of the speakers, grabbing you by the ears and demanding that you rock from the first moment to the last! You’ve taken the pill; now get back in line!”

Raised on his father’s record collection of Marc Bolan, Alice Cooper and AC/DC, mainman, Kyle Lamley (guitar/lead vocals) teamed up with lifelong friend, Paul Edwards (bass/vocals) to form the spine of the band, with drummer Jake Dalton recruited in 2016 to complete the current line-up; and after two early well received EPs, THEIA released their debut album in September 2015. Entitled Take The Pill, it was a self-funded release and a huge slab of angst and melodic noise that delivered the chunky guitar of Zakk Wylde; the ripping bass of the late, great, Lemmy Kilmister all married to a hard-hitting drum sound that drives it all along.

They continued to lay the groundwork for a bright future, heading out on the road for a mixture of headline, support and festival shows across the UK including Hard Rock Hell X in 2016 and building momentum for the release of their fabulous new album in June 2017.