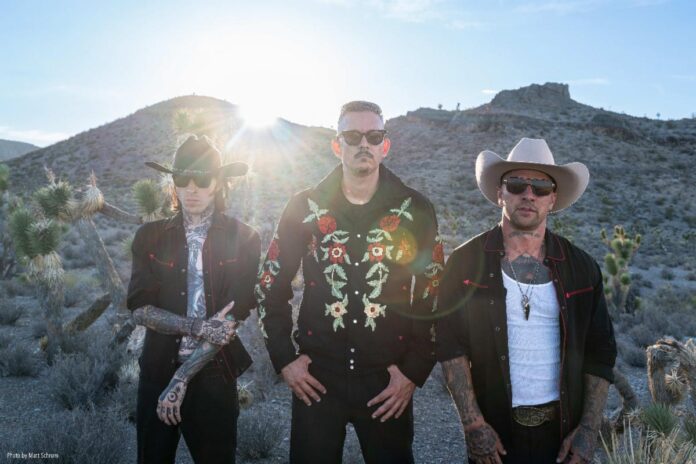 The single, which is available to stream HERE, comes accompanied by the final part of a video trilogy directed by Todd Hailstone.  Hailstone crafted the story’s two previous videos, for both the album’s title track ‘DEATHWESTERN’ and ‘The Bringer Of Light’ (from ‘Pagan Rhythms’ 2021, the first part of the story).  He now completes his apocalyptic vision of a deathwestern world with a compelling finale, fitting the seasonal mood for Halloween!

In August, the Las Vegas band revealed yet another new track, Moonlit Torture, featuring a guest slot from Dwid Hellion of Integrity.

“‘Relic of Damnation’ has been my favourite riff on the record but was the biggest m’fer to finish.  I knew I had a classic that brings back that Metallica, Slayer vibe I love so much, but I never liked the vocals and tried out three or four different rewrites after the demo. The very last night we worked on it, Theresa, Matt and I were fried and about to call it a night when I repurposed a verse from a country song I was writing and put it over the first verse. The vocals were done in one take and is my favorite vocal delivery on the album.  I also love the vocals that trade off at the end between Justin Fornof and I.  ‘Relic…’ is a banger and has been a staple of our live set since our first show!  I’m so excited for people to finally have the studio recording!

The video is the finale of our DeathWestern trilogy with director Todd Hailstone. Being able to work with my longtime friend, going all the way back to being high school punk rockers, has been incredible.  He took my vision of gunsmoke, gore and heavy metal and worked up three incredible videos. It was probably a little ambitious to do a film trilogy that spreads across two albums, but I think the performances Todd got from Derek and Voki to finish this bad boy off were amazing!”

Check out the finale in the series below.