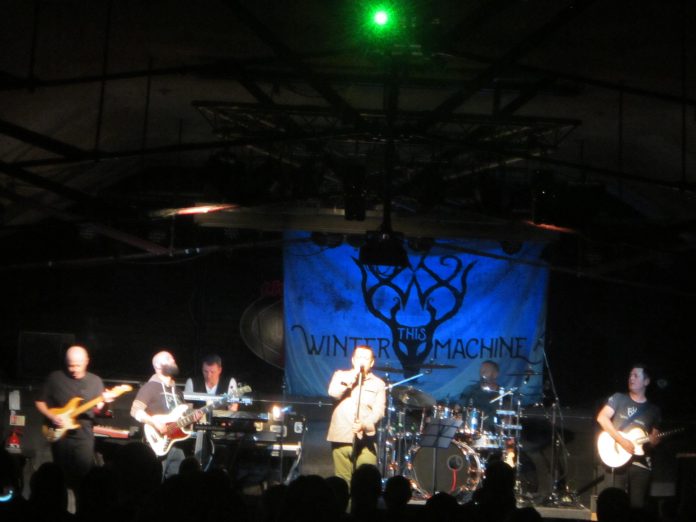 Having released a stunning debut album last year with `The Man Who Never Was` I was really looking forward to seeing and hearing how these tracks would be fleshed out live. This Winter Machine are gifted with seasoned musicians that have shared stages with everyone from Uriah Heep to Marillion, Tim ‘Ripper’ Owens to Uli Jon Roth. There is little fuss as the guys walk onstage and open the evening with `Lullaby` an instrumental opus that lays a marker down for what`s to come. Vocalist Al Wynter joins the fellas and outlines the shape of how the evening will progress with the band playing some old stuff but also playing the forthcoming new album `A Tower of Clocks` in its entirety. Away we go with a wonderful cut from last year`s offering with `The Man Who Never Was`. A sixteen-minute journey that is broken into four parts Asleep, Dreaming, Snow and Awake. The lyrics share the plight of someone who is lost, unable to connect to an image in an old photograph, convinced they are not who and what people believe them to be. Encompassing emotions of self-conflict, crushing doubt and indecision. Stunning,

We are encouraged to move closer to the band as Al confirms that he has put on his best aftershave for tonight and wants us to come closer and smell him. The opening song from `A Tower Of Clocks` allows him to leave the stage while the backbone of this band Graham Garbett (guitars), Andy Milner (drums), Mark Numan (keyboards), Scott Owens (guitars) and Peter Priestley (bass) entrance us with this wonderfully melodic composition, Another tune from the new album `Herald`, indeed the opening track, follows and it`s a delightfully varied piece with some sprinklings of guitar not akin to Joe Satriani. `Justified` another from the forthcoming `A Tower of Clocks ` album is quite simple in its structure but really mesmerising. The piano laying down a quite unearning hook line. This track having been released for download, had within a week equalled previous hits. A brilliantly emotive track that really gets under your skin the more you hear it.

A look back to the first album with one of the first songs written together as a band. The reflective `The Wheel` on a life that held possibilities, opportunities that maybe weren`t taken, a number that gives the troupe a chance to flex their musical abilities. After a recent discussion about not understanding how people can derive pleasure from hunting, Al has written and offers up for our contemplation `The Hunt`. This is a real terrific rock out oeuvre, `Symmetry & Light`, `Delta` and the insightful `When We Were Young` are aired before the final track `Carnival` on `A Tower Of Clocks` is played. The closing track of this nigh on two hour set is a trip back to the first album with `Fractured` an expansive tune with it`s great chorus and poignantly haunting lyrics.

This Winter Machine are a progressive rock band that wear their influences proudly, but absolutely bring their own sound to the party. This West Yorkshire outfit know not only how to write a decent tune with thoughtful and reflective lyrics but can deliver it in spades in a live situation. Last years album was a stunner and on the evidence of what I heard tonight, the follow up will be equally as good if not better. It should be available in the next couple of weeks or by end of September and I certainly can`t wait.