THE WALK OF SHAM 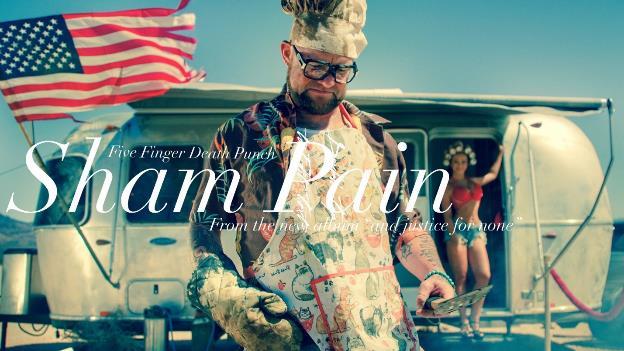 Five Finger Death Punch have premiered the new video for the song Sham Pain, off their forthcoming new album AND JUSTICE FOR NONE, due out Friday 18th May. http://smarturl.it/AndJusticeForNone

“Sham Pain is a lyrical snapshot of probably the most chaotic, yet the biggest year of our career,” says guitarist ZOLTAN BATHORY. So far we’ve come out of every bear attack relatively un-scraped, and the band is tighter than ever. Life is not so difficult if you don’t take yourself sooo seriously. As long as you can find the humor in everything you are winning and the winning is strong with this video, as it follows the footsteps of our NOscar winning masterpiece ‘Jekyll and Hyde.’ It was a simple process: we lit the set on fire and then made our poor director Rob Anderson’s artistic sense into a piñata. Whatever he could salvage became the music video.”

With their customary airtight riffs, muscular grooves and seismic melodies, FIVE FINGER DEATH PUNCH maintain their signature intensity, all while pushing themselves into new territories on AND JUSTICE FOR NONE. AND JUSTICE FOR NONE marks the multi-platinum hard rock band’s seventh studio album and is available for physical and digital pre-order HERE.

For AND JUSTICE FOR NONE, the quintet – Ivan Moody (vocals), Zoltan Bathory (guitar), Jeremy Spencer (drums), Jason Hook (guitar), and Chris Kael (bass) – set to work in their home base of Las Vegas with longtime producer Kevin Churko (Ozzy Osbourne, Disturbed) a year after the release of last album, Got Your Six. In the studio, the group collectively stepped up their game as a unit. “We just understand each other so well,” says Jeremy Spencer of Churko. “There’s a huge level of respect on both sides. He gets the best out of us.”

Released on 20 April, Sham Pain reached the #2 slot on iTunes’ Metal Songs chart and debuted Top 10 on the U.S. Rock Song Chart. To date, the song has received over 2 million streams in its first two weeks of release. Gone Away, the band’s previous single (a cover of The Offspring’s 1997 hit) currently sits at #5 on Active Rock radio and has received over 30 million streams in the US alone and sold over 100,000 downloads.

Catch FIVE FINGER DEATH PUNCH on tour in the following US cities: