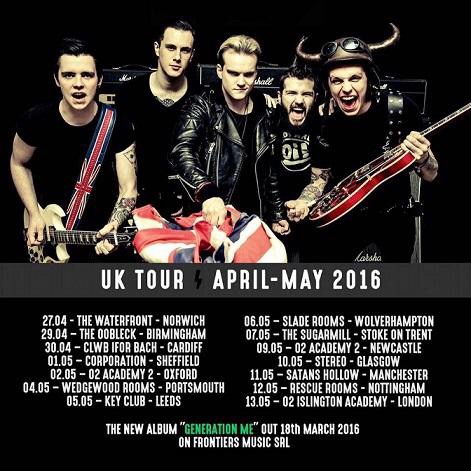 The Treatment get the party on in Birmingham

It’s still ridiculously early when Scotland’s three piece The Amorettes take to the stage. Later on there’ll be a club at this venue. MVM doesn’t know whether Gill, Hannah or Heather stay for the Friday night indie festivities, but we’ll wager right now that if they do, they’ll drink anyone under the table in the place and moreover they’ll deliver a swift boot the jaw of any faker about. Last year the ladies were the opening act for the Black Star Riders and Europe double header. They were rather good then. Now they’re even better. It’s not that there is anything particularly original about songs like “Give Em Hell”, “Get What’s Coming” or “Rock Me, Roll Me” – there isn’t. It’s not that there’s anything particularly subtle about them (“do you like it hot? Do you like it heavy? This one is called “Hot And Heavy”” says Gill before the last song). But, boy do they have a charm and a passion for what they do. Plus, they’re just sleazy enough and there’s just enough of the air of a bar fight about them to suggest they could fill ACDC’s soon to be vacated boots given half the chance.

It seems like a very long time since MVM found itself in Nuneaton on a Friday night to watch a four band bill including some unknowns from Cambridgeshire on their first tour. Fast forward six years and another Friday evening in The Midlands and a very different band greets us. This is meant both literally and figuratively. Literally given the line up changes that saw Mitchell Emms join on vocals and Tao Grey come in on guitar, but more prosaically, it just feels that The Treatment have woken up to the thought that. This. Is. It.

Just released album “Generation Me” saw them shake off the fresh faced youthfulness and make an album that was a definite step forward from those before. The band seem to know this too because they play a good deal from it. “Let It Begin” performs opening duties here as on the record and as an opening its a punchy affair. Of the others, the title track seems like a mission statement, “Cry Tough” is probably better live than on record, “Bloodsucker” is vitriol filled and angry at something – or more likely someone – and the current single “Backseat Heartbeat” is a glorious mid paced rocker. It is also the only ballad played tonight in a faced paced set.

There’s a smattering of older material. “The Doctor” is still magnificent, “I Bleed Rock N Roll” is as straight up and anthemic as the title suggests. The “Drink, Fuck, Fight” is still young, dumb and full of spunk, that it doesn’t quite work is partly because Emms looks like a choirboy up there and it’s difficult to imagine doing any of the three things he has just clenched his fist and told you he’d like to do.

That apart the new boys are superb and appear to have re-energised the whole band. Grey is an energetic presence and seems to rub off on fellow six stringer and near namesake, Tagore, as he gives an electrifying exhibition.

The Tagore version even gets a little solo spot in the last song, the good time, “Get The Party On”- a slot he performs while wearing a Viking horned helmet. This would usually be an encore, but the layout of The Asylum doesn’t allow such things. This might be the last time that The Treatment play venues where they can leave the stage easily, though, because watching them here it’s as if the penny has dropped and they are no longer a band with potential. They have arrived. Generation me might become generation now.