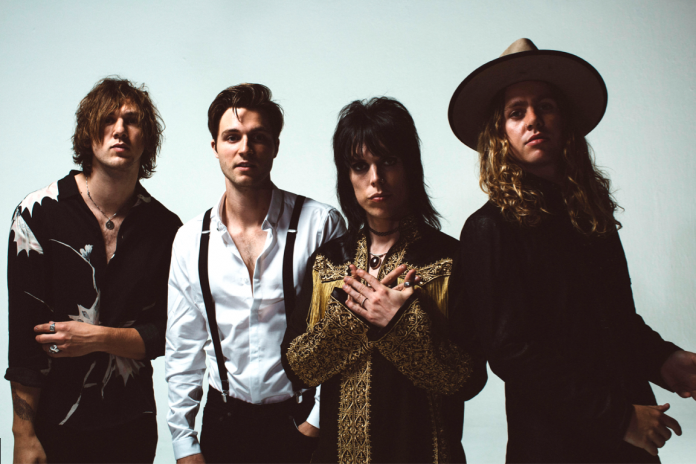 British rockers The Struts have released a brand new single ‘Primadonna Like Me’. A foot-stomping, disco-inflected, glitter-drenched rocker, full of Stones-y swagger and boasting a chorus that has already had audiences worldwide roaring it back at the band within seconds of hearing it, ‘Primadonna Like Me’ is The Struts at their phenomenal best.

“‘Primadonna Like Me’ was written about my stage character, my alter ego,” says frontman Luke Spiller. “It’s this completely deluded guy running around his small town, all dressed to the nines—a full-on 21st century dandy going around saying, ‘Don’t you know who I think I am?'”

The track follows the release of the band’s recent single ‘Body Talks’ – which is already blasting its way straight up the airplay charts across America – and both songs will appear on the band’s forthcoming album, the highly anticipated follow up to their 2016 debut, Everybody Wants.

In just a few years, The Struts have found themselves massively embraced by some of the greatest icons in rock-and-roll history. Along with opening for The Rolling Stones, The Who, and Guns N’ Roses, the four-piece were hand-picked by Mötley Crüe to serve as the supporting act for their last-ever performances.

The Struts recently finished a tour supporting the Foo Fighters, which included two performances at Madison Square Garden, and featured Luke Spiller duetting every night with the band on their version of Queen & David Bowie’s classic hit, ‘Under Pressure’. Dave Grohl has lavished praise on the band, regularly declaring that they are the best band ever to support the Foo Fighters.

The Struts are now preparing for an extensive US headline tour and will be announcing further UK shows soon, to follow their hugely-praised main stage performance at Download this year and sold out London and Manchester headlining shows.