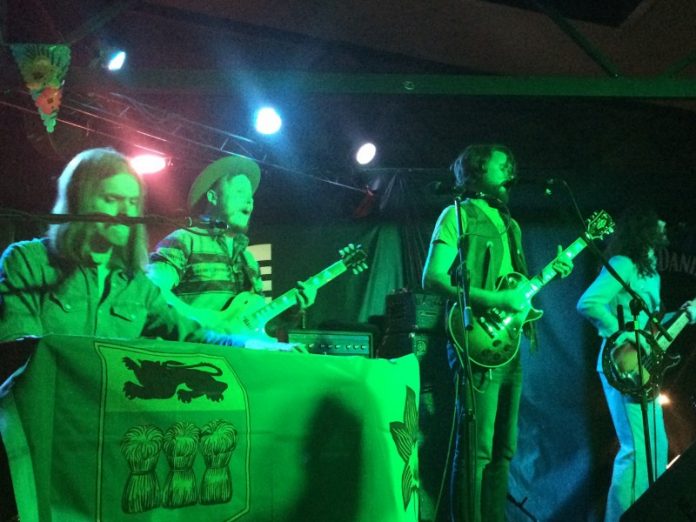 Saskatoon, Saskatchewan’s finest prove it was no fluke

Cannock three piece The Bad Flowers are rapidly becoming one of the most accomplished bands on the Midlands circuit. The release of their new EP “Killing Time” recently has helped, but it’s the live shows that are really taking them up a notch. And they aren’t resting on any laurels either, new song “Big Country” is tried here and goes looking for any horizons it can find. “Renegade Lover” is catchy hard rock and “Living The Dream” breathes new life into some older material. By the time “City Lights” has concluded things with singer/guitarist Tom Leighton screeching one more solo and rhythm section Dale Tonks and impressively hard hitting drummer Karl Seleckis locking onto one more wrecking ball like groove it’s job very much done. Dare we suggest that The Bad Flowers are blooming good?

It’s The 25th January 2016, and MV is watching The Temperance Movement about 100 yards away from where we are tonight. The support band for the evening is a Canadian band that we’d never heard of, with a name that brought to mind some terrible indie nonsense.

Then they started playing.

The Sheepdogs are quite simply one of the most welcome surprises that we’ve come across in the last few years. The key to their brilliance (and this is not misplaced hyperbole when discussing them) is essentially that they take everything that’s ever been good about rock n roll and distill it into one handy 100 minute package. And this most simple of concepts can be summed up equally easilly: because if they were good for 40 minutes with TTM back in winter, then here, in the spring – dealing with what we might term a full flock of songs – they are formidable.

Last year the band released a stunning record called “Future Nostalgia”. They kick off with three from it, “Where I Can Roam” offers a stark beginning, with contrasts magnificently with “I’m Gonna Be Myself” and the Black Crowes style stomp of “I Really Wanna Be Your Man”. With scarcely a pause from breath the five piece, who manage to sound slightly more raw onstage, are off into the harmonies of “Who?” and the soul of “Bad Lieutenant” and when you consider this is all within the five songs it might explain the grab bag of eclectic magnificence here.

It doesn’t stop either. The bands obvious debt to The Allman Brothers is paid with “Southern Dreaming, which is, explains frontman Ewen Currie, an ode to getting away from the cold of where they live. Perhaps because of this, there’s such a warmth to the music they play.

There’s a wonderful lack of image and pretension about them – here tonight livewire bass man Ryan Gullen is resplendent in a very fine pale blue suit – but my, how they mesh together. Whether it’s Jimmy Bowskill’s guitar playing or Shamus Currie on the keys, it all works.

Lap Steel is all over “Jim Gordon” and the wonderful twin lead of “Take A Trip” brings the welcome spectre of Thin Lizzy hurtling into view. Perhaps best of all is “Help Us All” which sees Shamus and his Trombone take centre stage.

If the thumping “I Don’t Know” ends things, then when they return it’s with hair truly let down. “Whipping Post” is a screeching cover of The Allman Brothers track, while “Learn And Burn” is one of their own and in time might just be treated with the same reverence by another band somewhere down the line.

They leave their second appearance in Birmingham in just over two months promising to return in the future. You’d imagine they’ll continue to grow too, because The Sheepdogs in full flight are clearly just a little bit special.

And moreover, that ladies and gents, the lesson here is you should always get there for the support band. Imagine missing something as good as The Sheepdogs. It doesn’t bear thinking about.