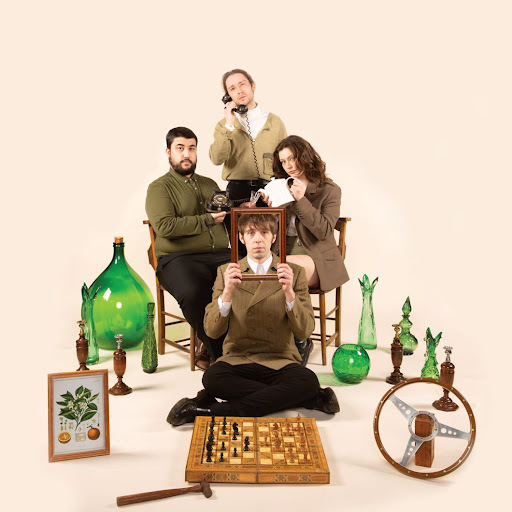 Leading the charge, The Black Country-based newcomers are releasing the new single: “The Sea Has No Friends“; a stately slice of poetic rock that arrives in tandem with the EP.

Expertly tapping into and memorialising a certain place and time in history, the latest single from Headshrinkers is a lofty expanse of a track that merges spoken-word lyrics with velvety vocal harmonies and opulent stretches of instrumentals.

As gentle acoustic guitar strums and skillfully-crafted poetry descend into an exhilarating crescendo of steady and majestic drums, jubilant riffs and increasingly urgent vocals, “The Sea Has No Friends” ingeniously boasts the band’s breadth. Straying slightly from the rip-roaring post-punk of their earlier singles, the new track stays true to the band’s knack for capturing the imagination and evoking the sights and sounds of a specific — and at times long forgotten — moment in time.

Of the story behind the track, vocalist and songwriter Garran Hickman explains:

“It was quite the reflective day when I wrote that piece. Words and melody were both written in half an hour. It’s just two entwined memories really: one is of my older relatives sharing stories of their loved ones in the war, and secondly the opening line, ‘the sea has no friends’, are words my dad used to describe the sea.”

Produced and mixed by Gavin Monoghan at Magic Garden Studios in Wolverhampton and engineered by Liam Radburn, the track comes as an astute follow up to the band’s most recent single “Monocle“.

An anthemic and anarchic track with earworm choruses and playful punk instrumentals, “Monocle” came complete with a hedonistic video filmed at the Red House Glass Cone in Stourbridge  — which featured prominently in hit BBC series Peaky Blinders —  and nods to the area’s notorious history.

“The Sea Has No Friends” also comes as another glimpse into Headshrinkers’ forthcoming EP ‘Doorway Conversations‘ — a debut poetic upshot that is the culmination of the band’s recent creative output.

The extended release captures the zeitgeist of lyricist Garran Hickmans’ early life through to the present day, with striking observational lyricism blended with heady and acerbic punk instrumentals. With poetry nodding to Hickmans’ youth and videos and artwork paying homage to the band’s home and upbringing in the Black Country, Headshrinkers have set out to create songs expressing anecdotes, memories and misfortunes in their first oeuvre as a form of catharsis to ready them for their promising new chapter.

Headshrinkers are Garran Hickman (vocals), James Knott (guitar), Xavier Al-Naqib (bass) and Scarlett Churchill (drums, backing vocals). Having formed in 2019 and bonded over a shared vision of capturing the intricacies of modern life within their music, the Black Country-based foursome have been quick to make a name for themselves on their local music scene and beyond.

Carving out an unmistakable sound characterised by its unflinching poetry set atop searing and confrontational guitar riffs, thunderous basslines and pummelling drums, Headshrinkers were dubbed as Brum Radio‘s ‘Band of the Year’ for 2020, and named on This Feeling‘s ‘Big in 2021’ list.

With a run of early singles under their belt including the rugged and raucous ‘Doorway Conversation’, menacingly poetic ‘Interrobang’ and anthemic recent release ‘Monocle’, Headshrinkers have attracted praise from the likes of Louder Than War and The Revue amongst others.

Dubbed as “noisy, moody and absolutely brilliant” by Happy People, the band’s sound has been described as “incendiary post-punk laced with stunning poetic majesty” by This Feeling. With comparisons to Joy Division and a commendation for their “clear intellectual depth” coming from Our Sound Music, After Paris also commended Headshrinkers for their “pounding, high energy instrumentals” that “combine perfectly with vocals akin to the most exciting bands in the UK’s thriving punk scene.”

HEADSHRINKERS
TO RELEASE NEW SINGLE: “THE SEA HAS NO FRIENDS” || DEBUT EP ‘DOORWAY CONVERSATIONS’
OUT 3 JUNE 2022