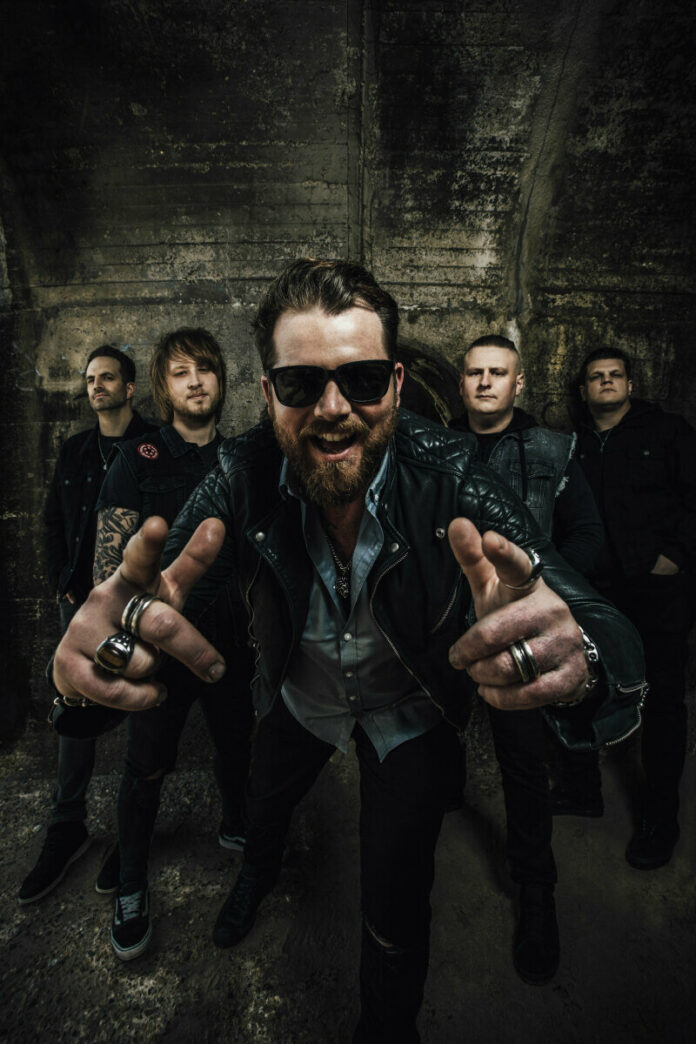 “’Broken Heartbeat‘ is a personal favourite of mine from ‘Synergy‘” say vocalist Joe Hawx. “It packs a punch harder than Tyson Fury‘s and has a chorus that is going to be a great crowd singalong. This was the last song we wrote for the album, it came together in no time. It is the perfect way to round off the album, and much like the first single “Say Goodbye to Yesterday”, it reflects the sound of the whole album, our influences and where we‘re at as a band. Buckle up and enjoy!”

Formed in 2015 and dropping ’Ain‘t No Rest‘ in 2017; a debut loaded with chunky riffs, cheeky hooks and catchy choruses, which referenced touchstones of classic rock but with an unmistakable modern edge to deliver a hugely melodic yet hard-hitting statement of intent from a hungry band ready to make their mark.  2019 saw the release of a brand new 5-track EP ’Devil In Me‘, showcasing an evolution in the band‘s sound. Lead single ’Unchained‘ racked up tens of thousands of listens on Spotify, quickly becoming a fan favourite with its soaring vocals and crushing riffs.

Wicked Stone‘s live performances have established the band as one of the UK‘s hottest upcoming acts. Mixing solid, powerful performances with a good time. Their rock‘n‘roll swagger ensures Wicked Stone shows are fun, exhilarating, and unforgettable. Their ability to win over audiences exemplified in their acclaimed appearances at Ramblin‘ Man Fair, Hard Rock Hell and Winters End festivals. Not forgetting a recently lauded opening slot for Steve Harris‘ British Lion.

With a sound is built around the edgy, melodic, and soaring vocals of Joe Hawx, under-pinned by hard-hitting drummer Olly Smith – a drummer that has spent time touring the world, opening for Iron Maiden as a member of the Lauren Harris band alongside Judas Priest guitarist Richie Faulkner. A line-up change in 2019 saw original Wicked Stone members Joe and Olly collide with lead guitarist Dave Austin, and the monster one-two combo of Joe Davies‘ crunching guitars and Tom Lane‘s gargantuan bass. This new collaboration created a sum bigger than its parts, inspiring the album-title ’Synergy‘.

The new album grabs the listener from the outset with lead single ’Say Goodbye to Yesterday‘, a blistering rocker with a chorus likely to be stuck in your head for weeks. Joe Hawx sounds huge on this new record, having clearly matured and evolved vocally and lyrically. He is found at his best on the anthemic and contemplative, ’Now You‘re Gone‘ – musically a departure for the band yet guaranteed to become a fan favourite. Dave Austin brings the fire with rip-roaring guitar solos and fierce twin guitar harmonies on songs such as ’It‘s Not Enough‘ and ’Going Wild‘. Joe Davies and Tom Lane deliver the thunder on ’Not Alone‘, and what looks set to become a live favourite, ’Broken Heartbeat‘. Olly bulldozes through the album like a mechanised behemoth, a formidable driving force in ’Reclaim the Crown‘ yet restrained and musical on the emotive, ’The Fires Burn‘.’Synergy‘ is set to drop like an anvil crashing through your living room ceiling, make sure to catch the band on tour and experience the live juggernaut that is Wicked Stone!