New album mixes up the genres
Having spent the last 5 years touring festivals, squats and far-flung venues, Will Tun & the Wasters are finally ready to unleash their debut album, The Anarchonist’s Cookbook, to the world on September 25th. You can use the links above to stream/download the album for reviews, and please get in touch with us to set up any interviews/features!

The album represents their journey of personal and political discovery through alternative communities and underground culture, bringing together styles from Balkan to ska, folk to hip-hop, punk to world music. When combined, The Anachronist’s Cookbook represents arguably the most eclectic representations of underground music existing today.

The Anachronist’s Cookbook will be released on CD and digital via underground legends Riot Ska Records in the UK, and the world-renowned Plan-It-X Records in the US, both labels perfectly encompassing the DIY ethic the band have held since they began.

From humble roots, the band have toured Europe, supported protests and occupations, received regular airplay on BBC Radio 1, had songs remixed by electro legends including Slamboree and amassed a dedicated online fan base, including over 40,000 YouTube hits.

On Friday 18th September the band will be revealing a video to definitive track “The Other Side” created by award-winning BBC screened animator Tim Wheatley. 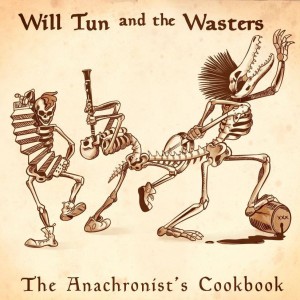