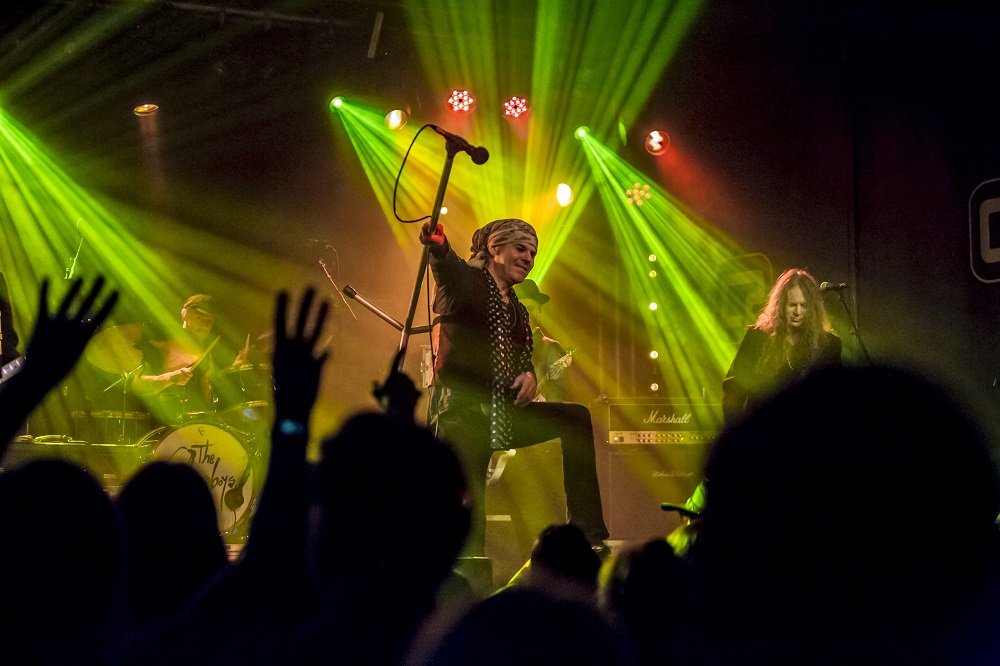 It’s not much of an exaggeration to say that MV saw Troy Redfern live so many times last autumn and winter that he almost felt like our house band. Here, though, it’s a totally different vibe. The other gigs – when it was just him playing solo  – were great. This sees him with a band and, this is superb. A study in power, groove, blues and rocking intent, played by a power trio songs like “Scorpio”  “Sanctify” and the absolute rip-roaring masterclass that was “Waiting For Your Love” are elevated to another level.  This is not surprising, of course, when you factor in the class of his “The Fire Cosmic” record from last year – it felt like he was finding his feet both as a performer and a songwriter, and it shows here when he casually tosses out “Love And War” as though not a big deal. It is. They (and the key word is “they” because the band are imperious) finish off as Redfern normally does with “Voodoo Chile”, here however, it has a groove like a wrecking ball. There are few better things to watch than a power trio at the top of their game. That was the Troy Redfern Band tonight – and given their touring schedule this year you’ve got no excuse to miss them.

Of all the things you expected before The Quireboys hit the stage tonight, Spike – their always avuncular and seemingly tipsy frontman – singing “Amazing Grace” Elvis style wasn’t up there. But, we are where we are, and that’s how he introduced “Original Black Eyed Son” (it’s from the “Amazing Disgrace” album so it sort of made sense).

That one was in the encore here, and really, The Quireboys have for 31 years since their debut record been made for these types of Saturday nights.

The thing is, when it comes to the Quireboys, you know what you’re going to get – you are going to get some brilliant songs (and mostly ones you know every word to – there’s not many newbies in the crowd, instead the bands loyal following is out in its droves) played by blokes who love them as much as you do. This is the best version of the band, I’ve said that before on these pages when I reviewed the re-recorded version of the debut last year, and watching them live again, I stand by that.

Beginning with “I Love This Dirty Town” (almost autobiographical as Spike lives nearby these days) the rest of the next 45 minutes or so is entirely built around “A Bit Of What You Fancy”.

A disclaimer: It is one of my all-time favourite records and has been since I first heard it at 15. It changed my music taste, and I couldn’t care less how many times I hear songs like “Misled”, “Long Time Coming” or “Whippin’ Boy” I love them just as much. Crikey its 83 days since they opened for Dead Daisies upstairs and I am still excited to see them again.

The odd thing is though, perhaps because they were never fashionable, they don’t sound dated in any way. The big hits “Hey You” and the rest are greeted like old friends, and there are people dancing on the stairs.

The slower ones – “I Don’t Love You Anymore”, “Roses And Rings” and the country of “Sweet Mary Anne” show a tender side, but after “Seven O’clock” there comes the key. “Thanks” yells Spike “for keeping music live with The Quireboys” and that’s the point.

They come back of course, with the gorgeous blues of “Mona Lisa Smiled” and the one that’s their signature tune almost “This Is Rock N Roll” – and it is, it really is.

Then the last one, the only one from “….Fancy” they haven’t done yet. They’ve got an early curfew to contend with for an indie club night, but no matter: “Are you going to the disco after?” enquires Spike, “there’s a “Sex Party there!” A woman in the crowd reckons she’s going and the front man shoots back “at your age luv, go home!” It’s that kind of night, its that kind of band, the best fun for 31 years is showing no signs of slowing down. They are The Quireboys. “We’ll see you at the bar,” says the singer as he waves at his people. Unlike the hymn, we expected that, and they’ll have had an incredible night, no doubt.