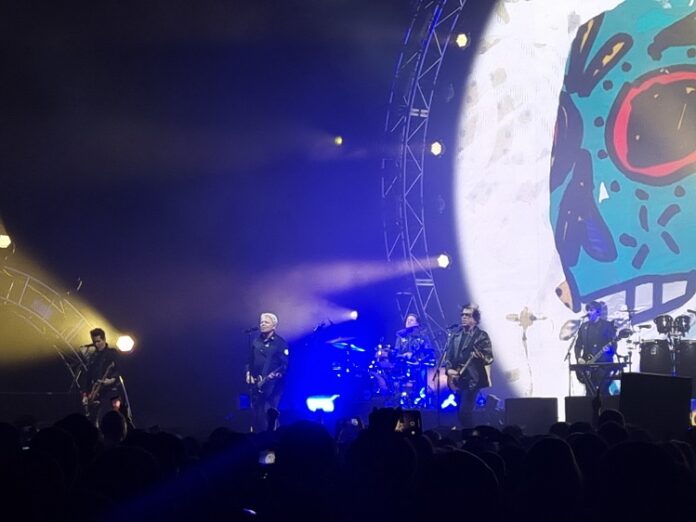 Bob Vylan, know how to make a statement, you have to give them that. “Kill the Queen,” screams Bobby Vylan (both the members are called that) “she killed Diana….” The Republican in me is immediately interested, of course, and that’s basically it with BV, they are a band that you can’t ignore. Well you could, but they’d probably smash you to bits anyway. Bobby – the frontman – waves a bat about during “CSGB” and the undercurrent of violence is never far away in their half an hour. “Pulled Pork” deals with police brutality, and their mix of punk, urban, hardcore and all kinds of extremes is never better shown than in the way that Bobby – the drummer – smashes his kit and Bobby – the frontman – spits the lyrics in “We Live Here”. And its those lyrics that compel. I am, as well as a Republican, one of those “lefty c***ts” they excoriate in one of their songs, and as such, as a bloke in my mid 40s who has no idea what its like on “the roads” and wouldn’t insult intelligence pretending anything otherwise, I can’t pretend to empathise. I can recognise punk rock with real feeling and a desire to struggle, though, and you best believe its all over this.

Back in the late 90s (I think, it is way back in the mists of time) The Hives opened for Danny McCormack’s Yo-Yo’s in the Black Country. Howlin’ Pelle had trotted out that night and informed us – if I recall – “We are The Hives, your new favourite band, from Sweden” and I couldn’t stand them. By the end of the set I’d bought a t-shirt and a CD. That’s kind of how it goes with The Hives. And as such, their set starts slowly while the assembled throng get used to the way they do things, but once they are in full swing there’s never been any stopping them, and there isn’t now either. By the time they get to “Walk Idiot Walk” everyone is doing as they are told by Pelle, who is simply just a rock star, and nothing more, and when they get to “Hate To Say I Told You So” (“it’s been a hit single on every continent, so we’re gonna stare you out first because you will like it”) they are the arena rock band they’ve always been in their heads anyway. They lose a bit of momentum in honesty by dragging the closing “Tick, Tick, Boom” out a bit, but there’s something of the true rock n roll band about The Hives, and its good to have them back.

The Offspring are playing “Self Esteem” as their encore tonight and it happens. That moment when you realise how you get to play in arenas as a headliner. You write songs that connect. With lots of people, and lots of generations for a long time.

And that’s it, that’s all it’s ever been about to get to this level, and make it special for the crowd.

That’s, essentially, what The Offspring do for about 80 minutes. They take a crowd on a journey with them. Songs go by in a blur and if ever there was a band who knows what they are good at, its them. “Staring At The Sun” might kick things off, but we are soon into “Come Out And Play” – the anthem to many people here it seems.

This is a band with a new album, though and with the confidence to play them. “The Opioid Diaries” is an absolute beauty, and perhaps the pick (although “We Never Have Sex Anymore” is a lot of fun later in the set), and they’ve fitted right in, for sure.

As always with the band, though, there’s plenty of fun and Dexter Holland and Noodles are almost like a Wayne’s World sketch in their back and forth – and Noodles plays a history of his guitar heroes including snippets of GBH, Sabbath and Maiden at one point.

Holland too, gets his moment in the sun, as it were, with a piano version of “Gone Away”, but after that there’s the usual sprint to the arena rock finish. “Why Don’t You Get A Job?”, “The Kids Aren’t Alright” and the one that everyone my age will be indelibly linked with. “Pretty Fly (For A White Guy)” is a copper-bottomed diamond too, and if it came out tomorrow, it’d still be a classic.

The Offspring, though, they know not to do it last. “The Kids Aren’t Alright” does that, and gets us to the encore, where we came in.

Do not doubt, though, that The Offspring deserve to be in these type of environments, and do not doubt that they are as good as it gets at playing these stages. Not bad for assholes with low self-esteem, right?!