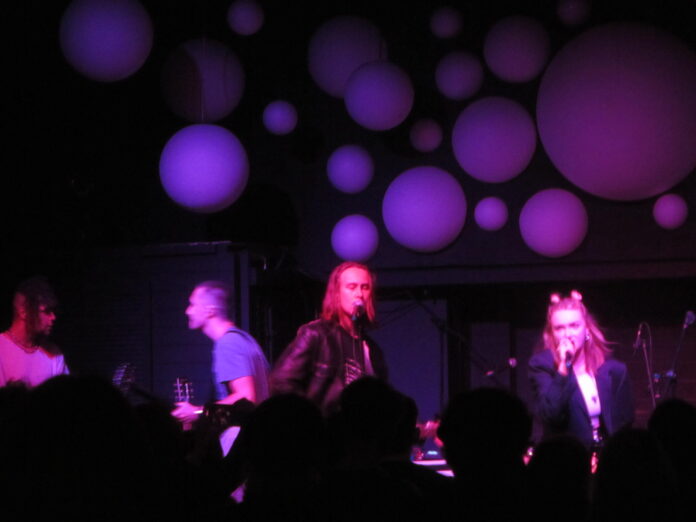 The lights dim as the 1968 hit `Oh Happy Day` by Edwin Hawkins & Northern California State Youth Choir is pumped through the pa as Glaswegian gothic post-punk and electronic-pop quartet The Ninth Wave take to the stage on this frosty Autumn evening in the UK`s second city.

They offer up their own song with a similar title `Happy Days!` but this number is a little darker in texture with lyrics that shine a torchlight on the highs and lows of life. The chorus of “What goes up must come down, and I suppose, the other way” becomes almost hypnotic as the number progresses. `This Broken Design` follows on from the opening track and again it`s a deeply mesmerising piece with dual vocalists Haydn Park-Patterson and Millie Kidd trading lyrics in this song that deals with perplexed feelings, bygones and finding comfort in strangers.

We have a much more upbeat and faster paced offering with `Hard Not To Hold You` before `Used To Be Yours` which is a more reflective cut that kind of deals with the void you end up in after a relationship ends. There was a deep Peter Hook bass line running through this number.

`Piece And Pound Coins` is the track that really introduced me, a latecomer to TNW and it`s a powerful number that Haydn has shared “I wrote this song about a friend who passed away a number of years ago. I’ve never really felt like I wanted to/could write about him for a number of reasons, but I guess the main one was because that for a long time, I wouldn’t have known what to write. The song also lets out a bit of confused anger that I felt not long after he passed, as I watched how a few people reacted to his death and the way in which they talked about it.”

The dark and a little disturbing slow burn `What Makes You A Man` will become the bands next single and Millie heads into the crowd mid song and challenges people face to face as she almost spits out the lyrics. I`m only glad I was hiding somewhere towards the rear of the venue.

We have `New Kind Of Ego` which acts as a dialogue between two people and their distrust for one another with a quite telling lyric of “When your skin starts crawling ’cause of last night’s actions”. It`s a wonderful earworm of a song and I was left mumbling “Did you forget to tell me?” for hours after the show concluded.

The band then share a new song `Pivotal` which to me was quite haunting. We have an uplifting message shared with `Everything Will Be Fine` which is “a song about twisted optimism, self-reassurance and hope,” singer Haydn Park-Patterson explains.

The thumping `I`m Only Going To Hurt You` began life as a poem, titled ‘My Severed Heart’ by Park-Patterson and again reflects on difficult relationships. We close out with a track that according to the band is about finding comfort in the uncomfortable and being able to hide yourself behind an overbearing and engulfing undefined fear with `Maybe You Didn`t Know` It`s a delightfully anthemic and spiralling composition to leave us with.

This was an interesting and at times quite intense evening. We enjoyed a mix of upbeat tracks and some more introspective slower burn numbers but the band tried to make this more of an event rather than just another gig. I loved Haydn Park-Patterson slight Glaswegian inflection in his vocals and he and Millie Kidd had their vocal interaction off to a tee. The unsung heroes tonight were Kyalo Searle-Mbullu and Calum Stewart who kept the backline going allowing the frontline duo to entertain.

The Ninth Wave can refer to a wave of incredible size that comes after a succession of incrementally larger waves and on the strength of tonight, this band will definitely be creating waves of their own.