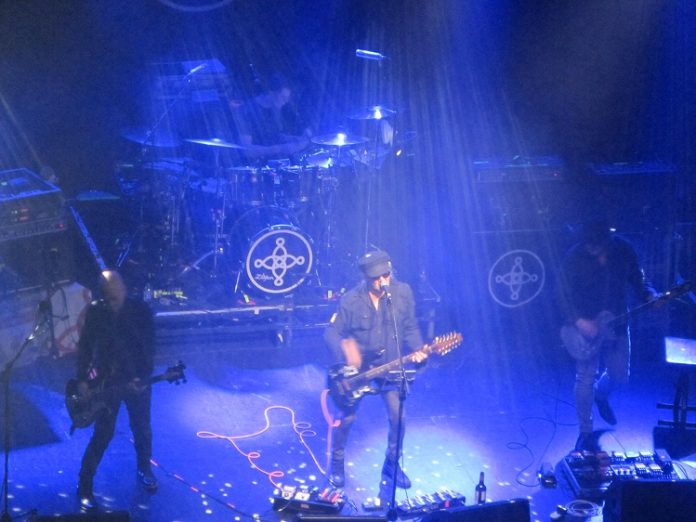 It`s been just over two years since Gothic Rock Gods the Mission toured. They`re back on what they are calling The United European Party Tour and the first stop is in my hometown of Birmingham on this over thirty date tour, which will take the fellas all over Europe and back in Blighty in early May. Tonight, and tomorrow`s gigs are really warmups for the tour, which to me, makes it all the more interesting.

I get in minutes before the start and make my way to the top tier of this former Congregational institutional church as the place is absolutely heaving. The lights dim and the theme to the Dambusters film is piped through the pa system as the band Wayne Hussey, Simon Hinkler, Craig Adams and Mike Kelly take to the stage.

There`s no better track than `Beyond The Pale` to open with tonight and by the chorus of “Sell me down the river and out to sea, cast me adrift, set me to sail, just one last kiss before raising hell” this near on capacity crowd are singing along. `Hands Across The Ocean` and `Garden Of Delight` quickly follow before adopted Liverpudlian Hussey mentions his beloved football team who ended a forty four game unbeaten run that night with “Like Liverpool, occasionally we lose” The band have been rehearsing hard and have promised songs from across their catalogue of ten main albums and true to their word they share the wonderfully intense `Grotesque` a track, which they assure us this line up have never played live before.

` Into The Blue` with its thumping drumbeat comes next then two really powerful cuts with `Within the Deepest Darkness (fearful)` from the last album release and a stunning version of `The Tears Shall Drown The Wind` with Wayne strumming an acoustic guitar and Simon playing piano. The first set concludes with `Shades Of Green`, `Swoon ` and `Swan Song` which is played with great emotion before the guys take their leave.

We don`t have to wait too long before the strains of the wonderful patriotic hymn `I Vow To Thee My Country` seeps through the pa and the guys arrive for part two. The place goes into a frenzy as the anthemic `Wasteland` kicks us off with the blistering `Serpent`s Kiss` and uplifting `Kingdom Come` quickly following with a cover of Neil Young`s `Like A Hurricane` sandwiched in between. The band continue to belt out favourites such as `Evangeline` with some curve balls like `Can`t See the Ocean For The Rain`, `Wake (RSV)` and `In Denial` thrown in for good measure.

The quite desolate almost exposed chorales of `Naked And Savage` and `Met-Amor-Phosis` follow before the show concludes with the almost spiritual `Like A Child Again` before crushing the faithful with the epic `Deliverance` The boys are encouraged to return and do so with `Butterfly On A Wheel` a song that Wayne shares is really divisive amongst the faithful.  They conclude the first encore with a nod to Wayne and Craig`s past playing `Marian` a track from The Sisters Of Mercy`s “First And Last And Always” album.  A final curtain call and the song that I feel most sums up the Mission is offered up with the inspiring and impassioned `Tower Of Strength` which has not only audience members atop of each other shoulders but a couple of devotees standing up straight, on their friends’ shoulders.

I must admit tonight`s event had something for everyone, as the guys played a varied set from a wide range of albums across the years. It`ll be interesting to discover what is played when the actual tour commences but at times I was transported back to the late eighties and early nineties when music seemed to mean so much. This evening was a reaffirmation of the legacy the band have, not only musically but that they can deliver it in a live setting. A former Congregational institutional church seems such an apt setting for a band calling themselves The Mission.