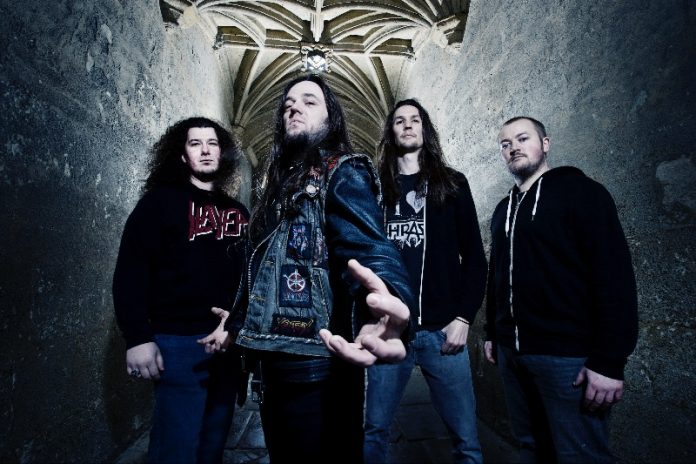 UK thrashers SHRAPNEL have streamed their new single ‘Might Of Cygnus’, taken from their third full length album Palace For The Insane, due 15th May via Candlelight Records.

Stream the new single and pre-order the record here: https://shrapnel.lnk.to/PalaceForTheInsane

Nathan Sadd (guitar) comments: “We’ve been so excited about sharing ‘Might Of Cygnus’ for a while now! It’s one of our favourite songs from the new record because it’s a blend of everything we do. It one of the best songs we’ve ever written, and is an absolute rager! It’s certainly not a prog song, but the title and lyrics are a tip of the hat to Rush and Neil Peart. We love A Farewell To Kings and Hemispheres, so we felt it would be cool to do a little tribute. We finally got to do a sci-fi themed thrash banger, which is something we’ve wanted to do for a while! For us, Cygnus is an explosive start to the new record and the new lineup. We can’t wait to get on the road and open the live show with it! Thrash, space, and Rush!”

Palace For The Insane lives up to its title with heroic ferocity, combining a relentless barrage of insane riffs, shredding leads, pounding rhythms, and savage vocals. SHRAPNEL‘s trademark extreme aggression remains a fundamental part of their sound, but this time around they exhibit vastly more dynamism, versatility and newly-refined songwriting skills.

Palace For The Insane marks SHRAPNEL‘s first recorded venture as a four-piece. Their first album recorded in collaboration with Samuel Turbitt of Ritual Sound Studios, it feels like a wholesale creative rebirth, with the voracious energy of a debut.

While taking on complex subject matters, the album is not shy in paying homage to SHRAPNEL’s old-school thrash roots. Those more partial to the faster side of this purest form of thrash will be floored by the sheer speed and technical wizardry of songs ‘Bury Me Alive’, ‘The Mace’, and ‘Infernal Choir’. This is definitely a new and improved SHRAPNEL, but necks are still going to get utterly wrecked.

Formed in 2009, SHRAPNEL have been on a campaign of destruction ever since. From the blistering underground EP No Saviours through to the 10th anniversary release in 2019, Decade of Decimation, the band has grown from strength to strength with no intention of slowing down.

Released on 15th May via Candlelight Records, preorders are now available here: https://shrapnel.lnk.to/PalaceForTheInsane