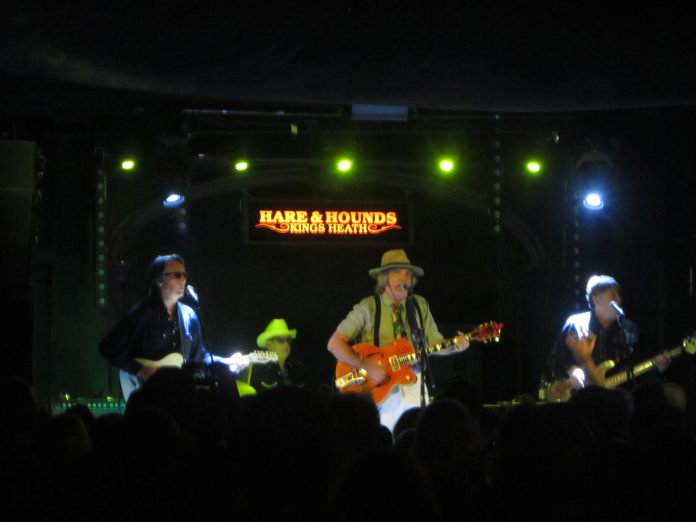 It was heartening to see a nigh on sold out room for the return of these pioneering sons of Americana. It came as a bit of a shock when frontman, Sid Griffin shared that it was thirty-four years since they last played in Birmingham and it was at this same venue. It seemed to me like only yesterday that both The Long Ryders and Green On Red would be playing regularly in Birmingham, mostly at The Breedon Bar, if my memory serves me right. Still time passes and the guys are back and have a new release to promote, Their first studio album in thirty years. the cracking and superbly titled “Psychedelic Country Soul”.

The troupe hit the stage and kick off with `Gunslinger Man` from the new release before offering up `You Don’t Know What`s Right, You Don’t Know What`s Wrong` from their 1983 “10-5-60” EP. During `A Stitch In Time` Mr Griffin is having all kinds of technical issues with his guitar. Which even raises Greg Sowders from behind his drum kit to see what`s happening. In his self-effacing way yje frontman says to the crowd “I hope you like the new trio”.

Guitar fixed the guys continue with songs that are culled mainly from the new album, their debut “Native Sons” and probably the most well-known “State Of Our Union”.

The new tracks `What The Eagle Sees` and `Gonna Make It Real` are really infectious and prove what underrated musicians and songwriters these fellas are. `(Sweet) Mental Revenge`, `State Of My Union` and a cover of the NRBQ song `I Want It Bad`, the band`s last single, are offered up and Stephen McCarthy gets to front the former and latter. That was the great thing about this band that they had great singers in not only Sid Griffin but Stephen and indeed Tom Stevens. We get two more cuts from the new release `Molly Somebody` and `Walls`, which was quite moving as it was composed by Tom Petty who paid to see the band one time, a touching tribute I thought. The show moves on at pace with the `Capturing The Flag`, `I Had A Dream`, `Bells Of August`, `Final Wild Son` and `Greenville` the show closes out with three tracks from “State Of Our Union” with `You Just Can`t Ride The Boxcars Anymore`, `Lights Of Downtown` and `Looking For Lewis And Clark` which sent the crowd into a frenzy.

It was excellent to get a chance to reacquaint myself with these ground-breaking Paisley Underground, alternative country, Rock ‘n’ Rollers but this was by no means just a nostalgia trip, this outfit still has an awful lot to say and offer. They are on the road again in October so if you missed them this time, make time to catch them then.