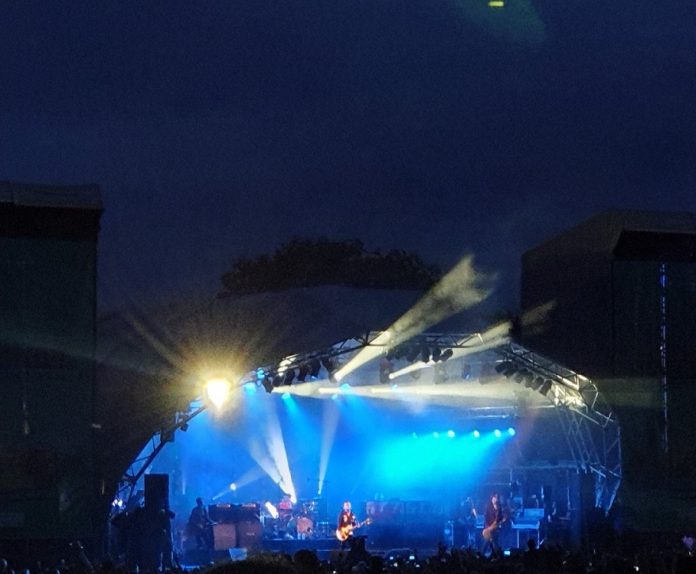 For the early part of the day, when uber cheerful local lad Rob Green was doing his acoustic r n b with a smile as big as the Trent and US rocker Barns Courtney was shaking a main stage at 2pm like it was Madison Square Garden on New Year’s Eve, the sun had been conspicuous by its absence and soaked ponchos were the order of the day (note to self, don’t put the poncho in your friends bag without turning it inside out first, it won’t go down well, but I digress.)

Things though had started to dry up by the time Slow Readers Club turned up for their captivating half an hour. Their angular brand of guitar rock is obviously from Manchester – and I don’t think anyone could deny the New Order influence in the songs – but the brooding presence of singer Aaron Starkie has, according to someone who’s knowledge on the subject I acquiesce to, the mannerisms of early Jarvis Cocker. Sonics aside, this is a superbly understated set. From the minute “Lunatic” starts things, to the ending of the pulsing “On The TV” there is something about SRC that will keep people coming back. Winning over a crowd that is not your own isn’t easy. Good songs help and Slow Readers Club have them in abundance.

I’ll be totally honest about this. I text my brother during Ash’s set and said this: “I am watching Ash at a festival and I’d forgotten how many good songs they had.” Turns out many had remembered because the second stage is rammed when they come on. We are by now in a heat wave, and that helps the boys deliver what would actually be right up there as the perfect summer festival set. 45 minutes in which they belt out all the ones you know (knew? – delete as appropriate) like “Kung Fu”, “Oh Yeah”, “Girl From Mars”, or “Goldfinger” or newer ones like “Buzz Kill”, which is all bratty and punky and would – maybe – be immature if men in their 40s were singing it in another context, but works brilliantly here. They end, of course they do, with “Girl From Mars” – which you did remember and is still ace – and “Burn Baby Burn” is even better. Time for a reappraisal? Maybe, or just go and watch them when they are at a festival, because Ash were on top form here. 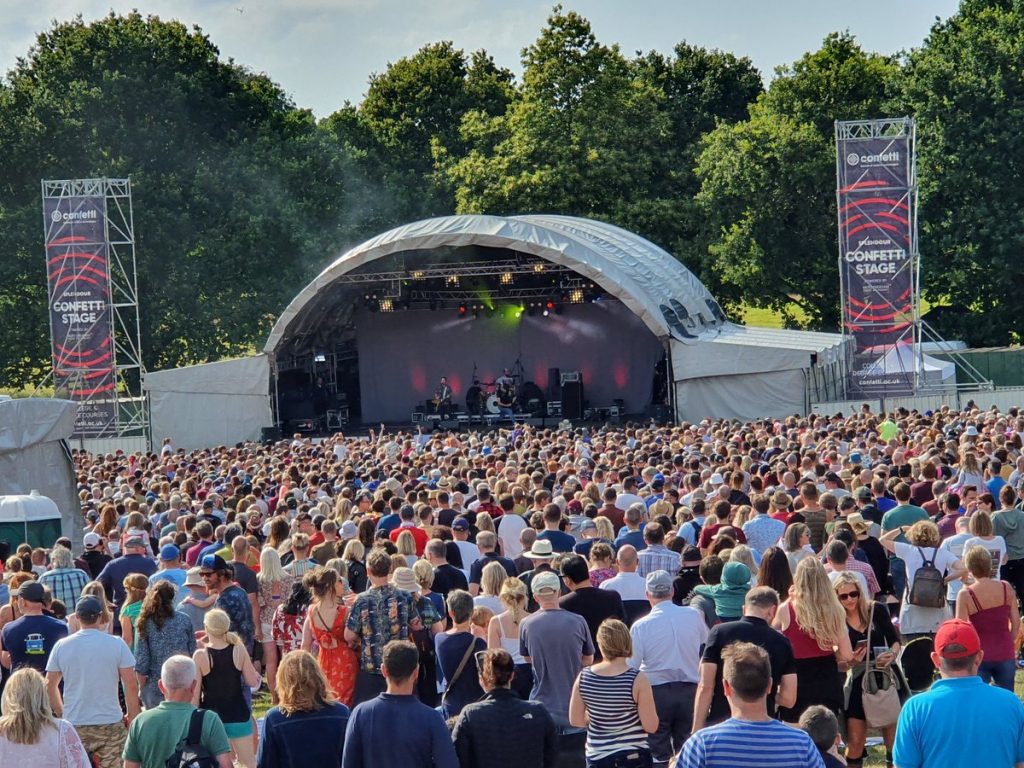 James Dean Bradfield is right, in fairness, when he says in the middle of MSP’s set: “we’re the ones who’ve to follow The Specials.” Now, in the spirit of truth telling, they aren’t and never will be, my “thing”. The experiences they write about aren’t mine, and the voice in their songs doesn’t especially resonate with me. I am, however, it seems to me, in a minority of one person. There’s a moment, when they drop “A Message To You, Rudy” and 25,000 in a field go nuts. Absolutely crazy in a collective way, and even if you don’t get why, you get “it.” They’ve got music to move people, that people connect with and in 75 minutes that starts with “Man At C & A” and ends with “Too Much Too Young”, they have a lot of classics to get through. There is an element of danger, too, the ever-acerbic Terry Hall follows up “Vote For Me” with the suggestion: “have you ever seen Jeremy Corbyn and Mel Gibson in the same room” – and considering that’s basically all he says in the whole set, it hits like a laser guided missile. Mix that with clear crowd pleasers like “The Lunatics”, “Monkey Man” and “Gangsters” and whether you like the band or not, you have to concede they have something special.

As do the Manic Street Preachers. But they have a problem too. First, as I said, they have to follow the Special Guests, who have just done what they did, but second, they’ve got an issue that Nicky Wire inadvertently hits on when they play “You Love Us.” “When we played this at Nottingham Rock City in the 90s,” he says. “There was sweat running down the walls, the stench of alcohol was pungent, it was wonderful.” It was, but the thing is, they aren’t that band anymore. They are great, still, and they can command an arena (I’ve seen them do it many times), but the vicious young punks are now middle-aged men. And for all that “Motorcycle Emptiness” is superb, and “You Stole The Sun From My Heart” is anthemic, they are better when they do the bigger, grandiose – and dare I say – more mature stuff. “International Blue” from their best album in a very long time, last years “Resistance Is Futile” proves that, in fairness, and there’s barely a person here who doesn’t know “If You Tolerate This Your Children Will Be Next” even after twenty years. In the context of a headline, festival spot, doing an acoustic “Ocean Spray” is brave, and following it up with two covers is even braver. Granted, one “Suicide Is Painless”, gave them their first top ten hit, but the other, “Sweet Child O’ Mine” proves two things: 1) no one can do it like GnR and 2) Nottingham wants GnR here next year judging by the reaction. They wrap it up with “A Design For Life” and as brilliant a song as that is – and regardless of who my personal tastes preferred (that is a band from South Wales not the West Midlands) it does seem that if the top two names on this poster had swapped around, then it might have worked better.