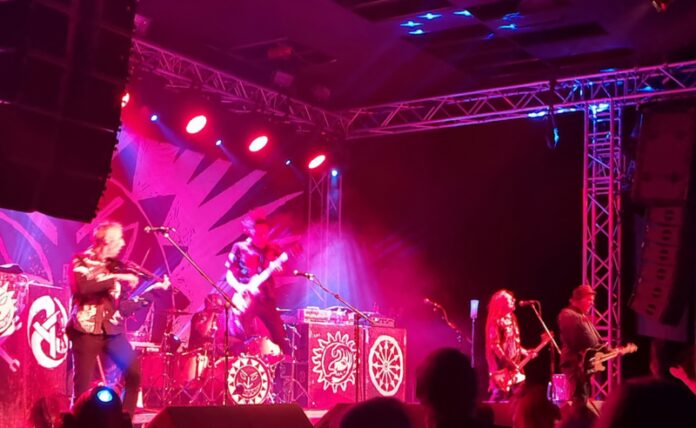 Joe, one of the pair of Bouys that make up Wilswood Bouys, has had better evenings. He manages to destroy not one but two strings in their last tune, “Save The Queen”, (about a drinking game, not a patriotic statement). The rest of the night had gone swimmingly mind you. The pair, from Mertsea Island in Essex, are a different beast to the usual acoustic thing. Josh, the other half of the band has a quickfire delivery, which gives stuff like “Leave The City” a flavour all of its own. “Change” (one of a pair about Joe’s love life) has a breakdown which is more suited to “Deliverance”, while “Must Be Love” – the new single produced by Frank Turner – sees a quasi rap mixed with a Dashboard Confessional feel. Its quite a thing. “Crisis” which wasn’t intended as a single until the Ukraine conflict began, is perhaps more what you imagined upon arrival, but this set showed a band who is willing and ready to succeed on their own terms only.

Just before they play their last song tonight – “Beautiful Day” as it forever seems to be – Mark Chadwick says something that didn’t strike me at the time, but oddly now seems important. He looks at the packed, sweaty crowd and says: “this is the first time we’ve been indoors to play a pop concert for ages.”

And he’s right, you know. If ever there was a band that is synonymous with outdoor gigs, festivals and festival culture it’s the one right here.

They are a different band since I last saw them too in October 2019 (which oddly enough was indoors too) as they’ve got a sixth member. Dan Donnelly, has added plenty. Additional guitar makes things heavier in parts, he takes extra vocals (“The Man Who Would Be King” is very much his moment in the spotlight) and he brings plenty of energy – that’s him jumping off the drum riser on the picture above. It changes the dynamic a little. In a good way.

At the start, everything is in place as it ever is. “Liberty!” yells Jeremy Cunningham and that’s it. This is a band who are at one with their fanbase in a way that few are. It makes for a special atmosphere, which is what I was getting at with opening. Festival gigs (even festivals the Levellers themselves put on) self evidently attract fans of all the bands on the bills. Not here. This is a Levellers crowd ready to worship.

They’ve changed things round tonight too, and this is a different set to what they’ve been playing outdoors. “England Be My Home” a nihilistic “Generation Fear” from 2020’s “Peace” record and a truly brilliant “Sell Out” make for a strident and striking start.

The words for the latter include this: “Keep the young paralyzed, educated by your lies/Keep the old ones happy with the news”. They wrote it in 1991. In 2022 we’ve got one of the “people” looking to lead this country wanting to make “vilifying the UK” a crime. You think this stuff isn’t prescient?

You don’t need to have my world view to love this band, though. This is a band you can jump up and down to and who are phenomenal live performers. They’ve got a sound all of their own, with Jon Sevink’s violin at the centre of it, particularly prominently on “Truth Is.”

In the middle of the gig there’s “Hope Street” and “One Way”. That’s their anthem, surely? It certainly seems to be here given the reaction.

They go back over 30 years for “The Boatman” which is fabulously fresh here, before the absolute highlight of “Battle Of The Beanfield”. Written about the riot in Wiltshire where 1300 police dealt with 600 travellers in the most brutal way, it is delivered with passion and sees Donnelly thunder on the harmonica.

Indeed, the end of the set which includes “The Men Who Would Be King” – a mighty slice of equality – and “World Freak Show” along with stalwarts like “The Cholera Well” and “Riverflow” marks the band down as having a back catalogue that is a match for anyone.

Its more than just the lyrics in songs like “Another Man’s War” and “15 Years” that make up two of the three encore tunes, it’s the way they mean every word and the way the crowd is as much a part of the gig as the six members on stage.

And their message too: “nothing is impossible in my own powerful mind.” That’s it, and that’s why this is a “pop concert” that transcends. It was like the song says, a “beautiful time” – see, sometimes the last lines write themselves.

Previous article
REVIEW: TRAVIS DENNING – MIGHT AS WELL BE ME (2022)
Next article
BAND OF THE DAY: SUN VOYAGER