The Iron Maiden’s Time Has Come 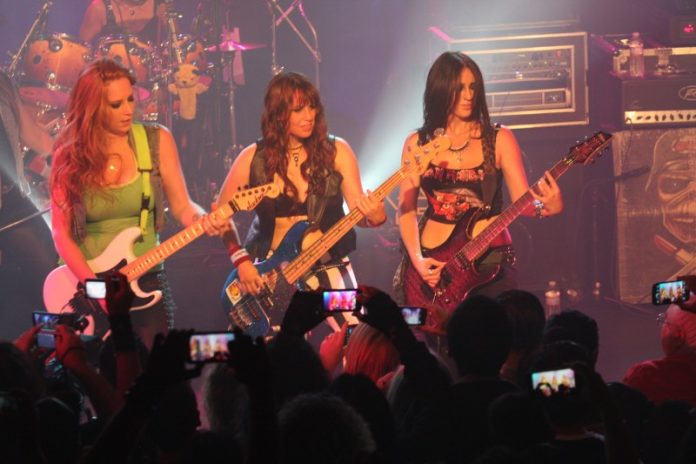 The world’s only all-female Iron Maiden tribute band The Iron Maidens will play their debut one-off London show at the O2 Islington Academy on 14th April.  Booking details are below

Tickets for the Shepherd’s Bush Empire show (which is still closed due to extended roof structure work), are valid for the O2 Islington Academy show.

Excited front-woman Kirsten Chickinson said: ‘For years people have been asking when we’re coming to the U.K. so it feels almost surreal that it’s finally happening. To play London–the city where Iron Maiden actually began in 1975–is thrilling and also daunting; I expect the “home” fans to be the most discerning but we are definitely up for the challenge! To see where it all began, this is hallowed ground’.

Formed in 2001 in Southern California, the Iron Maidens have quickly established themselves as one of the most notorious tribute act in the US, progressively expanding their fame far and beyond the Americas. These five women have conquered the attention of fans and fellow musicians with their musical prowess and electrifying live shows, where they perform hits and fan   favourites from all phases of Iron Maiden’s career with appearances by mascot Eddie, the grim reaper, the devil and more.

While Iron Maiden’s latest album hits the stores, the Iron Maidens celebrate the recent release of their first full-length studio album, the first studio tribute CD to a band ever recorded entirely by one artist; the cover artwork featuring a female monster was designed by none other than Eddie’s creatorDerek Riggs.

Despite being undoubtedly five rocking hot ladies, the Iron Maidens are not just pretty faces: in their career they have been joined on stage by the likes of Alex Skolnik from Testament, Lemmy, Megadeth’s Dave Ellefson, Anthrax’  Scott Ian and Judas Priest’s Tim ‘Ripper’ Owens. They were chosen to support Danzig, Cypress Hill, Snoop Dogg, Nightwish and Nevermore amongst others. They’ve been featured in Playboy and Hustler as well as Rolling Stone, Guitar World and Drum magazine.

The Iron Maidens will bring their show to the UK for the very first time on Thursday 14th April 2016, with a one-off date at 02 Academy Islington. Courtney and Linda have played in London before with different bands – Linda even at the same venue! – while it’s the first encounter with the British crowd for Wanda and Nikki.  Give them a warm welcome, hang around and make sure you get Nikki a drink: the show is on her birthday and  she’s looking  forward to  celebrating London style!

Tickets are available from:

For more info head to www.theironmaidens.com

Previous article
Use Your Brainiac’s
Next article
Free The Saints