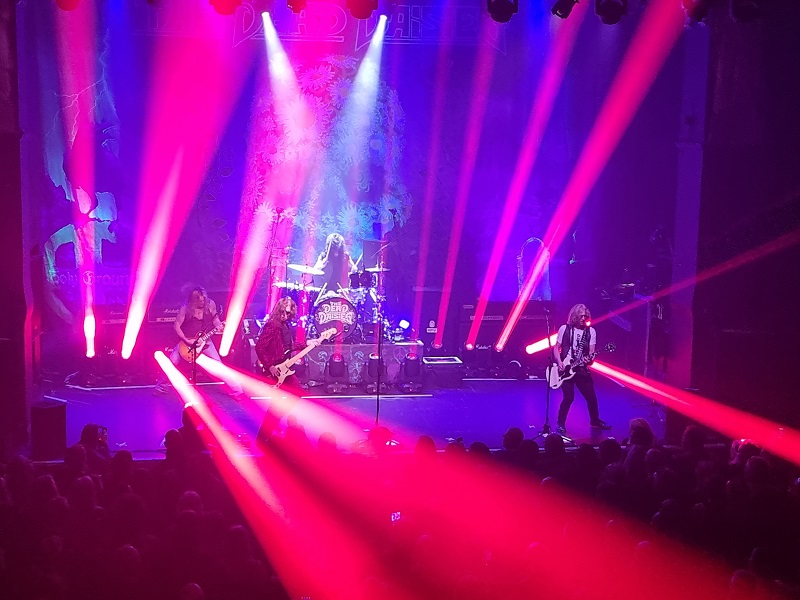 I’ve seen Cinderella start a gig at 9.40pm just so they could do the line in “Shake Me” – their second song – “I met this girl around quarter to ten” at 9.45, but watching The Quireboys start their set for this early curfew show at 6.59 with “7 O’Clock” is a wonderful rock n roll moment. We can debate why one of Britain’s finest ever bands is on stage in front of someone else’s gear, playing for 35 minutes at some ungodly hour, but we are where we are. Spike, Guy and the lads have been having this party for 30 years and they are, as always fantastic. They are treating this like a festival, and as a result, they knock out a few songs from their debut. “Misled” – an absolute beauty – “Long Time Comin’” is still my favourite song of theirs after all this time, “Whippin’ Boy”, “Hey You”, “Sweet Mary Ann” (“we’ve got some American’s in today, shall we give them a yee-hah”) and “I Don’t Love You Anymore” is cracked and weather-beaten. With that they are gone, and it’s still only 7.40pm – on the plus side of course, that’s loads of time before last orders. However, to be sensible for a second. In the 30 years of the band, they’ve never sounded better than this.

Of course, if the support band is that good, then the main band has got to be top notch, right? Well yes and The Dead Daisies are just about as good as it gets right now.

So, let’s get right to it and say this: “Holy Ground” – the album they put out earlier in the year – is a masterpiece. The only question remaining was this: how good would it sound live? Well, to answer with the barest minimum of hyperbole, it might well be that The Dead Daisies are the finest band of their type on planet earth right now.

As Glenn Hughes puts it later in the set, “we are a new band again”. And the additions of the Cannock legend (and listening to him split his accent between Black Country and West Coast USA is truly something) and drummer Tommy Clufetos have moved them into the Premier League. They know it too, you can tell, from the moment they start with “Unspoken”.

The songs are brilliant, of course, but the show itself is an arena one in all but name, frankly. The lights, the sound, the slickness. And to be fair, Birmingham is packed here, so who knows where it can go?

Five studio albums and a live record in eight years gives them a proper back catalogue to pick from, but even the older ones they play “Rise Up” and “Lock N Load” – the only one from their debut – are now owned by one G.Hughes once of Cannock.

See Glenn, is brilliant. He’s got– and I am trying to retain perspective here – perhaps still the greatest voice in rock – crikey, listen to him sing “Mistreated” from his Purple days and come to any other conclusion – but its more than that. He writes some fantastic songs. “Chosen And Justified” is one and a quite wonderful “Bustle And Flow”another.

The man to his right is very much his shadow (he calls him “my soul brother”) but Doug Alridrich is the king of cool, an Axe-slinger of yore, but nothing is aloof about him, about any of them actually, and they all seem delighted to be on stage again.

They cover “Fortunate Son”, and its mighty, they do “Midnight Moses” like they always did, but what they do now to follow this is a drum solo. Now, lets have it said, this one is a stunner. A genuine knockout, and it carries you along.

And the last few songs of the main set are basically a victory lap, but it’s the last two, “Like No Other” and “Holy Ground (Bassline)” that underline the point I’ve been making, that this might as well be the Dead Daisies debut record so well have they reinvented themselves this time around.

The encore, “Long Way To Go” seems to have summed up the journey they’ve been on over the last almost decade, and the ending “Burn” is another window into this new world. They’ve always been a band who did loads of covers (there’s actually less now than there used to be) but here they’ve got Glenn Hughes doing the song he might well have been born to.

And there’s one man in the band I haven’t mentioned. David Lowy. The rhythm guitarist and main man in the group. If you don’t know their history, Google it. If you do then to watch him tonight is to see his pride at his vision being realised. Every football fan knows a winning team doesn’t happen – even if you’ve got brilliant parts – without a chemistry. This lot have it. I’ve seen them many times over the years, never as good as this.