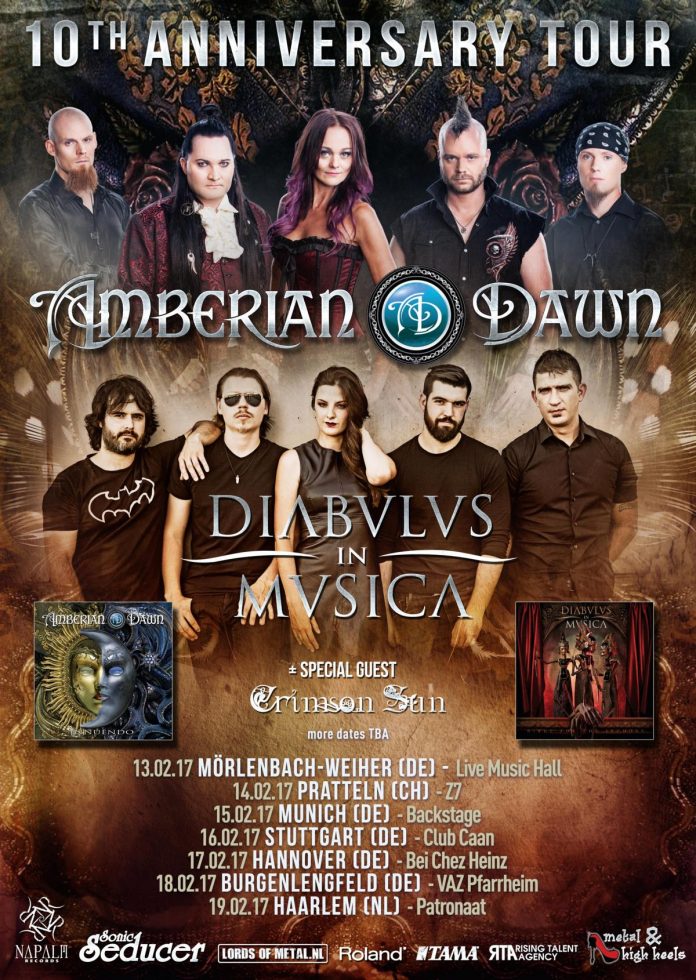 Co-headliner on the way

Time to celebrate the 10 year anniversary of symphonic bombast & catchy melodies of two fantastic Metal Bands!
Finnish Symphonic Metal masters AMBERIAN DAWN have teamed up with their Napalm Records label mates, DIABULUS IN MUSICA to hit the road for a huge co-headlining tour in February 2017! Support and opening act will be Finnish based Crimson Sun.
AMBERIAN DAWN are already looking forward to this Tour:
“Amberian Dawn is now 10 years old and we’re going to celebrate it properly by doing our first Headliner tour in Europe with our label mates Diabulus in Musica, who are also having their 10th active year happening as well. Our co-headlining tour will be named “Amberian Dawn 10th Anniversary Tour”. Opening act will be Finnish based Crimson Sun!”
DIABULUS IN MUSICA states:
“We are so excited to finally announce that we will be touring Europe again in February! This time it will be our first tour as co-headliners with the guys from Amberian Dawn, a very special one in fact, as we are both respectively celebrating our 10th anniversary as bands! This is going to rock so much! You cannot miss these shows: new album, new set-list, new merchandise… and above all, some awesome nights full of the magic and epic-ness of the finest symphonic metal! Hope to meet you all there, can’t wait!”