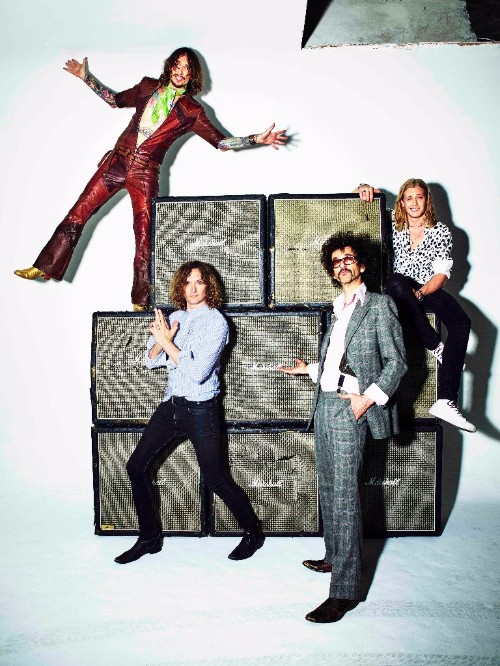 Delivering rip-roaring riffs that soar much faster than the lamented train service, England’s most distinctive, multiple award-winning, platinum-selling rock gods have once again created an important anthem for the nation, replete with spirited invective (a.k.a lots of swearing).

Regarding the track Justin Hawkins says, “This song has genuine realness in it, innit. Dan and I had to endure the Southern Trains “services” during the making of this album. The only difference between a normal day on Southern Trains and a day when they’re all on strike, is that on strike day the ArseClownery is deliberate. They are utterly incapable of running a reliable service. Fact. The rest of the world is laughing at us. I hope this song goes some way towards facilitating change…”

As some of the more printable lyrics relate:

The wildly entertaining video finds the band performing the song via ludicrously fun SnapChat videos, which can be watched here.

‘Southern Trains’ follows the release of both lead single ‘All The Pretty Girls’ and the expletive-drenched insight on the music industry, ‘Solid Gold’, both of which feature on the forthcoming album Pinewood Smile, out on October 6th.

All three tracks are available on all streaming platforms and also available for download with pre-orders of the album for the instant gratification of fans. Click here for details: https://TheDarkness.lnk.to/PS

Pinewood Smile finds The Darkness on electrifying form, delivering some of the most sharp-witted, infectious and downright brilliant songs of their career, and is being greeted with rave reviews, including 4 stars in the brand new issues of Q, Planet Rock and Mojo magazines.

To celebrate the album’s release, The Darkness will be touring extensively at the end of this year playing 17 dates in the UK throughout November and December including a headline show at London’s Hammersmith Eventim Apollo on December 10th. The shows are part of a wider European tour, entitled TOUR DE PRANCE.

Full dates can be found at http://www.thedarknesslive.com/tour-dates/