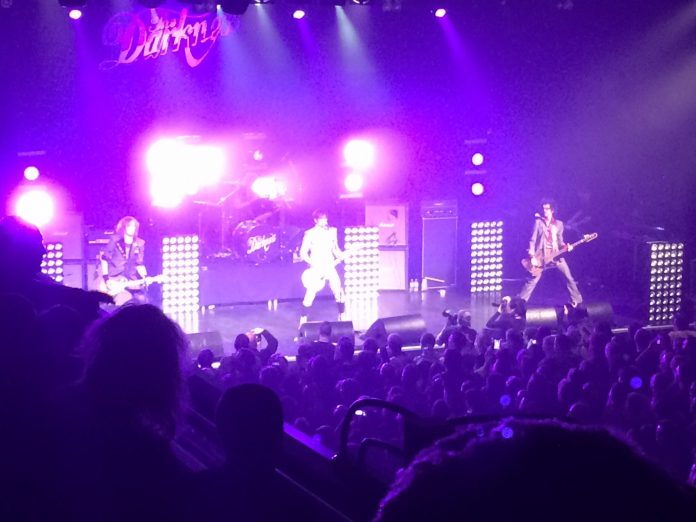 Justin and the boys still believe.

It’s easy to forget just how moribund the British Rock scene was back in 2003. We’d had the wonderful bands of 10 years before. The Wildhearts, Thunder, Terrorvision, The Little Angels and The Almighty were all, by then in various states of inactivity, and the scene was in desperate need of some rock and roll again.

It got it. In the shape of four fellas from Suffolk, who emerged with a collection of songs that sounded like ACDC, and with a happily jump suit wearing frontman from the old school, who realised that rock n roll needed characters – hell, it thrived on them – he had a ridiculously high voice and, yes their songs were a little bit ludicrous, but above all rock music needed a grin.

The debut album from The Darkness, “Permission To Land” – and MV will argue this with anyone – is still a classic of its time. The critics (mostly) sneered, the public didn’t give a shit and took a band that had been unsigned 12 months earlier and chucked them into arenas. We might never see the likes again, and The Darkness knew it. They merrily milked every drop of excess for all it was worth.

Ultimately they imploded, but like these bands always do, they returned. Returning to the fray in 2012 for the third album, which has been followed up with a fourth – the appropriately titled “Last Of Our Kind” – this year.

Which brings us today. And when three of the same four men as way back in the early 2000’s (the only difference sees Rufus – son of Roger – Taylor behind the kit), stroll out for “Barbarian” , then time, as well as all their differences, just washes away.

For the next two hours, The Darkness deliver a masterclass in arena rock, they just do it in a club sized venue. He of that voice, Justin Hawkins, might have shorter hair and more tattoos these days, but he’s unmistakably the same frontman. The engaging, funny, rude, well spoken, preening, prancing, dancing singer of old. His act is somewhere between Freddie Mercury, Paul Stanley and David Coverdale, and he is brilliant at it.

And just in case you’d forgotten, The Darkness have some magnificent singalong songs too, “Growin’ On Me” you might remember, some of the other stuff like “Friday Night” and “Givin’ Up” you might have forgotten. You wouldn’t have for long.

These – and let’s be honest here, nearly half the set – are from that debut record, there’s a smattering of others too. “One Way Ticket” the (near) title track of their vastly underrated second album is welcome, as well as the three from the new opus, with “Mudslide” the pick.

Oddly, though, it’s the one from “Hot Cakes” that sums the night up. “Every Inch Of You” contains the line “I’m in a band with my brother and my two best mates” and this, more than anything, seems to encapsulate The Darkness right now.

It’s this relaxed atmosphere that sees a mate of the bands called Mark arrive on stage to dance, that’s why Justin Hawkins can go off on a crowd surf and tell us the setlist, confidently predicting that “we’ll go off to rapturous applause after “I Believe In A Thing Called Love”” – he’s not wrong either.

They come back – as he’d said they would – and this being festive season they do so with “Christmas Time (Don’t Let The Bells End)”, by now Hawkins is wearing a very short pair of shorts having dispensed with his dungarees and delivers “Street Spirit (Fade Out) with relish. He’s off them for another wander, on a roadies shoulders, playing guitar in the crowd as “Love On The Rocks (With No Ice)” reaches a conclusion.

A show that was a neat refresher in why The Darkness were so popular in the first place. You couldn’t say they were the coolest band on the planet – they probably wouldn’t care for such an accolade- but it’s good to remember you can watch a gig with a smile.