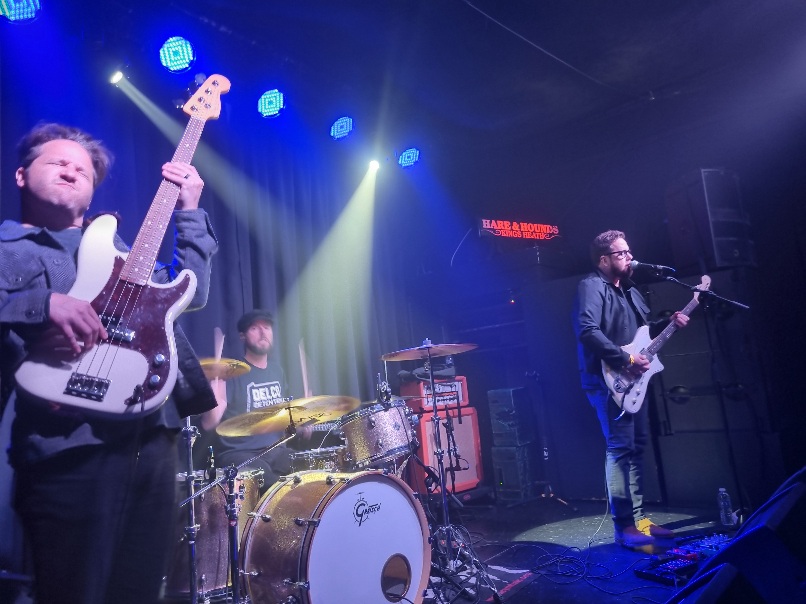 You could, very easily, mistake The Cold Stares members for three of the early evening drinkers who were in the downstairs bar at the Hare And Hounds. That is, until they play.

Chris Tapp – who is the least rock star looking frontman of a band you’ve ever seen – addresses the crowd (best described as small but enthusiastic). There’s (of course) no intro tape or bombast. “Hello,” he says “we’re The Cold Stares, we’re all a little under the weather, but we’re here to play some rock n roll for you.”

And for the next 75 minutes, that’s what they do. And actually, thats all you need to know about TCS.

Except, The Cold Stares are somewhat better than the small room in a pub on the outskirts of the second city. Love are next door in the bigger room, minus Arthur Lee. There’s a proper band on this stage. The Cold Stares are everything you wanted them to be.

This is, somewhat surprisingly, their first UK tour. Equally surprisingly they found fame earlier in the year with a track on a computer game. They start with it here. “Mojo Hand” is typical of what the music Tapp and Brian Mullins have made for years. Under the radar – mostly – and quietly brilliant.

The usual rules went out of the window a long time ago, so it comes as no surprise that they play a load of new songs from a record that might be out in the autumn, or might be out in 2023. Whatever the uncertainty, what is absolutely crystal clear is the quality of songs like “Come For Me” and “Got No Right” (perhaps the most immediate of the fresh ones). It takes either courage or an unshakable belief in what you do to play this many songs no one has heard. It probably takes both here.

Last year The Cold Stares released “Heavy Shoes”. A record that was one of (if not the) best of the year. The title track of it and “Hard Times” underline that neatly in case there was any doubt.

They’ve always been this good, but they haven’t always been a three piece. That’s recent. The addition of Bryce Klueh on bass means they can play some songs they haven’t been able to play before – not least the title track of their “Ways” album. And it means they can extend “I Was A Fool” to a proper jam and flesh out “Any Way The Wind Blows” a little too. The one Joe Bonamassa made famous (The Cold Stares are his favourite band) is a real beauty as well.

A band that seems to capable of changing tack even in the middle of their shows (there’s a couple of songs on the setlist that were swapped around) they are not like other bands. “2 Keys And A Good Book” and the “boogie woogie” as Tapp puts it, of “Going Down Easy” (if it’s a boogie then it’s one Clutch would want to be at) are delivered with a style that is all their own.

“Headstone Blues” (“I’m still writing about my awful first marriage 10 years on” deadpans the frontman) is a highlight, and it says much for their resourcefulness (not to mention the generosity of the support band) that when Tapp’s string breaks (he only has one guitar on this trip) he takes the loan and carries on “40 Dead Men” from where they left off.

They might finish with “Nothing But The Blues”, but actually this is a lot more besides. The lack of an encore doesn’t go unnoticed. Granted the layout of the venue doesn’t allow it easily, but The Cold Stares don’t strike you as the type to do cliché.

Getting on for a decade together and on their first visit to England. A chilly summer Tuesday with a band that is struggling with man flu might not be the stuff of dreams, but there was something very special happening here. It’s called music and it was stripped down it’s basics tonight by a band that are masterful at what they do.