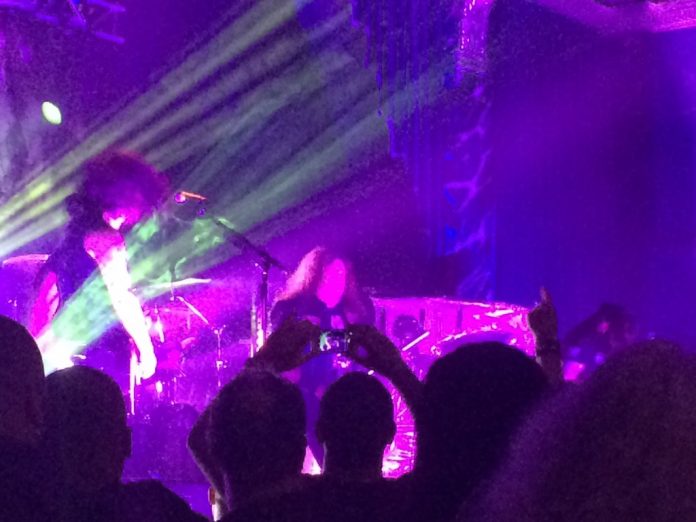 A sleepy Warwickshire town may never be the same again

Manchester’s Broken Teeth HC have released one of 2016’s most promising debut albums and such is the vigour with which they attack things here, it’s clear they don’t intend to let this chance pass them by. For half an hour they are the very definition of not dying wondering as their anger and spite comes through wonderfully well in a live setting. Towards the end, right before they hurl themselves into a wonderful “Show No Mercy” in fact, frontman Dale crashes the nail straight on the head: “I write down all my frustrations and scream them at you,” he says. “Hopefully you enjoy it, and for me it’s therapy”. Broken Teeth are a touch more nuanced than that, indeed, it’s a reasonable thing to say that songs like “Take Me Away” are the best blending of hardcore and thrash from a UK band since Evile burst onto the scene, but you get his point. Sound problems dog their set, but make no mistake Broken Teeth are here to crush and here to stay.

Savage Messiah might remember how that feels. It was them who once were the hot young thrashers, after all. Now, if they aren’t quite veterans, they’ve certainly been around for a while. They appear completely reinvigorated here too. Now more just a brilliant heavy metal band than anything else – “Hellblazer” even moves things into power metal territory – work like the massive “The Fateful Dark” is more than happy to pick up where Iron Maiden end, while “Minority Of One” (dedicated here to the officials who stopped frontman Dave Silver drinking in the street earlier) is a real heads down, thrashed up headbanger. Only on for 25 minutes here, it seems like a real statement of renewed intent.

It is entirely possible that nobody on the planet plays air guitar better than Testament singer Chuck Billy. He joins in the solo for “The Preacher” early in the set here on his mic stand as though it’s the most natural thing in the world. He does so with a grin on his face too, he’s had his hard times, his battles with illness and he’s come out fighting. It’s also entirely possible too that his band hasn’t often sounded better than this.

Since the first Testament album in 1987, they’ve been resolutely flying the flag for thrash metal. Since their return in 2008 after a seven year hiatus, they’ve been near faultless and listening to what Billy consistently refers to as “old school shit” tonight, you almost feel they might have never quite got the credit they deserve.

During the course of their 75 minutes tonight – there’s no encores because that would be frill and Testament don’t do frills – there’s some real fists in the air moments, like “Rise Up” (which isn’t old school at all, having been the lead track on their last album, 2012’s storming “Dark Roots Of Earth”) there’s some real heavy escapades, such as the wonderful “Legions Of Blood” which is a Slayer-like maelstrom, and there’s some, like “Into The Pit”, which are pretty self-explanatory and are designed so people can beat the crap out of each other.

Testament, though, whatever they do, are glorious and gloriously entertaining. Another of the songs from this millennium, “Native Blood” – about Billy’s heritage – is delivered with an unshakeable and unmistakable passion, while the foot is put on the throat and never leaves during “Practice What You Preach” and “Disciples Of The Watch” is simply viscous.

It’s not just the air-guitar playing frontman, but the rest of the band are in fine form. Alex Skolnick and Eric Peterson are as good a guitar duo as this and the incessant rhythm section provides a crushing foundation.

They leave to a thunderous “The Formation Of Damnation” (“one of my favourite title tracks” says Billy) and do so promising to come back for a proper tour. Whether that happens or not, one of the finest – and perhaps most underrated – exponents of the art of thrash proved they are just that again here. As well as wowing us with their air guitar skills, obviously.