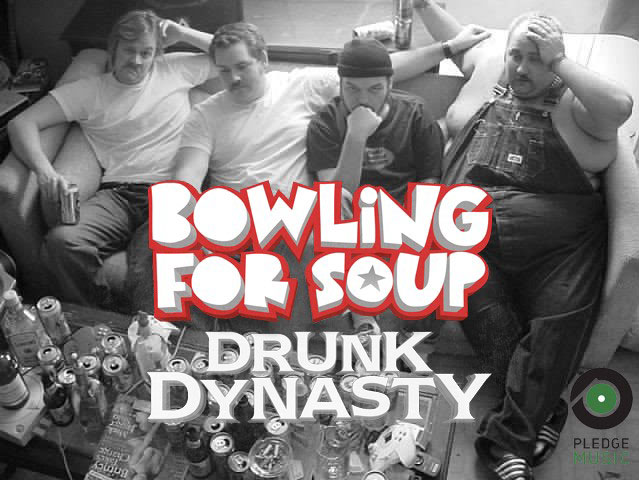 When Bowling For Soup announced new music, the fans got really happy and smashed the crowd funding target in just 9 days! Without even having time to get in a studio and take fancy shots of big mixing desks and videos of crazy antics, the supporters said ‘HELL YEAH!” and ‘Drunk Dynasty’ was a certainty.

Being long time champions of the PledgeMusic crowdfunding platform, Bowling For Soup didn’t hesitate in diving straight in to release their new EP through the service. Giving ‘pledgers’ access to exclusive rewards and a chance to be involved in the whole release cycle is something the band are really passionate about, so much so that during the first week in the studio, what started life as an EP took on it’s own future and ended up an album!

The clock is now ticking down to the release in late September, and to be in with the chance to get your hands on any of the exclusive rewards, or simply to ensure you get it on the day of release, get on over to www.drunkdynasty.com and pre-order right now.

Jaret explains that Drunk Dynasty just got bigger and better:

“When we decided to go into the studio this summer, I thought an EP was the best move. Not really for any reason other than time. I think the future for BFS is less music, more often. I hate waiting 2 years between releases. And I really like recording!
An EP is usually like 5 songs. We recorded 8 already. So I said FUCK IT! Drunk Dynasty is going to be 10 songs! Best of all, we aren’t increasing the price for the album on our pledge campaign.  Folks can still go to www.drunkdynasty.com and get it for the EP price and be included in all the exclusive updates! In addition, I want to keep the price as low as possible when we release to the public! Either way, I am just SUPER stoked for everyone to hear this shit!”