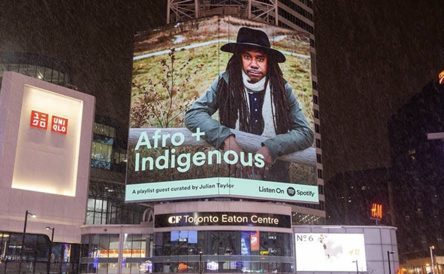 Celebrated Canadian musician Julian Taylor has garnered a pretty cool position as guest curator of the SPOTIFY playlist, newly named “Afro + Indigenous” – a name that Taylor requested specifically, to pay homage to his own heritage and in light of February as Black History Month. For more information please visit any of the links below or Taylor’s website.

Not only has Taylor been recently nominated for five 2022 Native American Music Awards for Best Debut Artist, Country Recording, Folk Recording (both for his highly acclaimed 2020 album The Ridge), Male Vocalist, and Country Video (for the title track), plus two International Acoustic Music Award (IAMA) nominations for Folk/Americana/Roots and Best Male Artist, but he has also been invited to guest curate one of his favourite Spotify playlists.Taylor is conscious and proud of his mixed Black and Mohawk heritage. “I come from two strong oral traditions and cultures,” he says. “One was stolen from their land and brought here and the other had their land stolen.” Taylor continues, “I was approached by Spotify and was asked to curate their Indigenous playlist for the month of February. When I received the news I felt very honoured to be asked, and at the same time a bit hesitant, so I made a tiny request of my own. I said that I would gladly do it if they would consider renaming the playlist for this month, which also happens to be Black History Month. They obliged. So for the next little while the playlist has been updated to reflect my own cultural identity and that of many others like me. I am very proud to announce that I am the first ever curator for the “Afro + Indigenous” playlist.” Thrilled and excited, Taylor posted on social media, “Excuse me while I kiss the sky👊🏾”Taylor’s highly acclaimed The Ridge earned eight nominations in 2020 and 2021, including those for two JUNO Awards, the Polaris Long List, and two Canadian Folk Music Awards, in which he won Solo Artist of the Year. Taylor is currently hard at work on a new album, which is tentatively scheduled for release in the Spring of 2022.