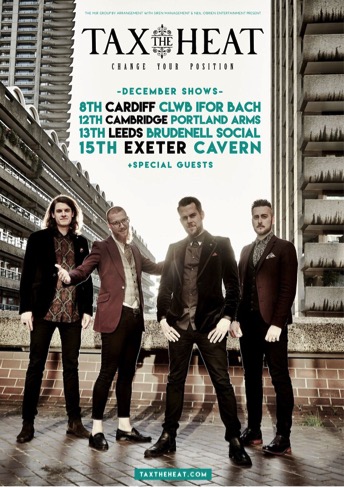 Following the release of the critically acclaimed second album, “Change Your Position”, in March 2018 and headline tour in April 2018, Tax The Heat have announced further UK dates in December 2018.

Vocalist/Guitarist Alex Veale says, “We’re excited to announce that we’ll be back out on the road in December for a handful of shows in the UK. It’s been great to see all of your responses to our new album ‘Change Your Position’ and we wanted to cap off the year with a celebration in the run-up to Christmas!”

Full UK tour dates for Tax The Heat are now as follows:

Tickets go on sale at 10am GMT Friday 14th September via www.taxtheheat.com
“Change Your Position” was the follow up to the 2016 critically-acclaimed debut album “Fed To The Lions”. The new album sees the band take a huge step forward as both songwriters and performers. The band’s unique blend of fuzz-driven rock with a modern alternative twist has won them a legion of fans. The album stamps its authority from the offset with the taut “Money In the Bank” (also the first single). From the staccato stomp of “Playing With Fire” to the huge riffs of “Cut Your Chains”, from the garage rock of “On The Run” to the slow groove and instant lyrical hit of “All That Medicine”. “Change Your Position” is a lean, focused album loaded with an energy that is set to propel the band to headline status.  The driving rhythms of Jack Taylor (Drums) and Antonio Angotti (Bass) are overlaid with the powerful riffs of JP Jacyshyn (Guitars) and distinctive melodies of Alex Veale (Vocals, Guitars).

From humble beginnings in 2015, Tax The Heat have become one of the most notable of new British rock acts. Multiple singles playlisted across radio in both 2015 and 2016 – taken from debut album “Fed To The Lions”. The band also honed their live craft supporting the likes Cadillac 3, Reef, The Graveltones, Black Star Riders, Vintage Trouble, Masters Of Reality, Virginmarys, Thunder and festival appearances such as 2000 Trees, Beautiful Days, Download, Calling and Ramblin’ Man Fair.