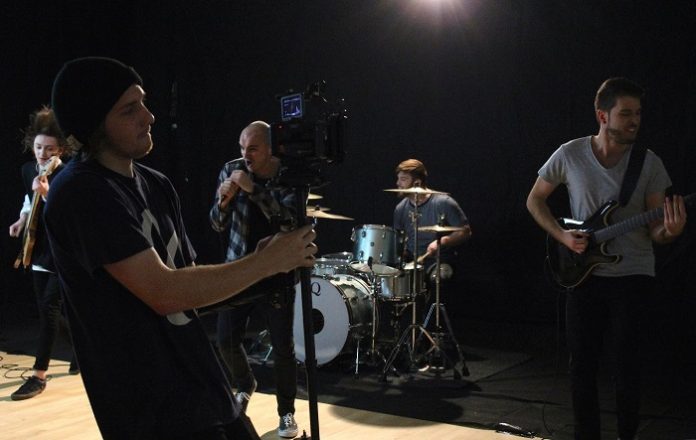 Red Seas Fire take you behind the scenes

Marking a new musical direction for the band, in what is effectively classed by the quartet as ‘Red Seas Fire 2.0’, the reimagining follows two-fifths falling from the band’s ranks, due to ill-health, in June 2015. No less sonically intense than the band’s previous body of work, recently release single ‘Prisoner’ sees RSF stripping back the progressive technicality in favour of a more direct, in-your-face approach – drawing kinetic influence from hardcore’s feral, built-for-sweaty-clubs energy, but mixing it with an arena-ready chorus hook from frontman Adams. Here the band discuss the creation of the claustrophobic video for the single and give you a behind the scenes look…

Why did you decide to effectively relaunch the band with this track?

Prisoner is the first track we wrote and recorded following the loss of half our members last year. It’s helps set the scene for what Red Seas Fire is now and how we will be pushing forward as a band. Prisoner is raw, it’s catchy and it’s full of the type of energy we will be bringing to our live shows.

What the video is about and how did the concept came about?

The concept for the video was built around the meaning of the song: following a passion in life and dealing with the struggles that accompany that. It’s about not listening to the people who tell you what you want in life can’t be attained and that sometimes the biggest obstacle to overcome is your own self-doubt, but ultimately finding understanding and acceptance in that.

It was directed by Zak Pinchin who has such credits as Blood Youth, In Archives, Napoleon, Lock & Key. The track’s manifested itself in the mind of Zak Pinchin as a room that would gradually close in throughout the video. We shot the video at a small village hall near Lincolnshire, which we completely blacked out the inside and built our room in. We all loved the idea especially as we were keen to avoid cliché references to anything prison related.

Did anything interesting or unusual happen during the filming?

We ended up running out of time during filming, so the scenes where the hands are grabbing at Robin, we actually filmed those back in Zak’s living room. We used black sheets to block out any view of the nice living room furniture and red body paint for the hands. A member of Zaks family walked in whilst we were shooting to what must have looked a very strange scene!

What are your thoughts on the outcome?

We are all very happy with the outcome and Zak delivered the perfect accompanying video to this track, matching energy and performance. We just hope everyone else likes it as much as we do!