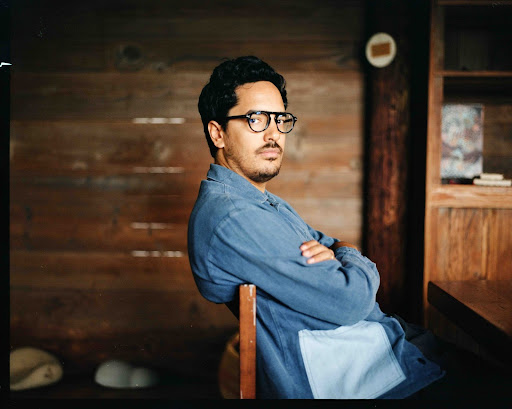 Sital-Singh will support Passenger on his European Tour in August & September before embarking on a headline UK tour, which starts in Bristol at The Fleece on September 25 and culminates at London’s Lafayette on October 9.

“Can’t Get High” was co-written by Ben Cramer, a.k.a. Old Sea Brigade, who previously collaborated with Luke on the acclaimed 2020 EP ‘All The Ways You Sing In The Dark’. The upbeat track pairs a high register chant with a luminous harmony as Luke assures “Can’t get high ’till you come down.” Sital-Singh explains the song is about, “Looking for meaning in the rubble of a failed relationship. Going over memories, trying to find the positives when things go wrong.”

The visually sumptuous video for “Can’t Get High”, directed by Glashier, was shot at Berlin’s iconic Tempelhof Airport. Closed to aircraft since 2008, the runway is now used for recreational purposes by cyclists, runners, families, dog-walkers, dancers, and – as seen in the video – roller skaters.

It’s a decade since Luke Sital-Singh released his debut single, “Fail For You,” introducing the world to his rare ability to craft songs rich in empathy and emotional resonance. Over three acclaimed albums – ‘The Fire Inside’ (2014), ‘Time Is A Riddle’ (2017), and ‘A Golden State’ (2019) –  these qualities have garnered him an impressive worldwide fanbase and seen his songs rack up 150 million Spotify streams. Luke’s music is frequently used in TV shows, ranging from US drama series like Suits, Grey’s Anatomy and New Amsterdam to popular UK shows like Made In Chelsea and Love Island. He has toured with Angus and Julia Stone, Martha Wainwright, and The Staves and even led his own TED Talk at the official TED Conference in Vancouver.

The follow-up to 2019’s ‘A Golden State’, which preceded his move to Los Angeles, ‘Dressing Like A Stranger’ was written and recorded in California, with Luke initially working alone at home in Los Feliz as COVID-19 descended upon the world. He later rented a studio and cut a few songs by himself before enlisting fellow Brit and singer-songwriter Dan Croll as co-producer and Tchad Blake (Fiona Apple, The Black Keys, Elvis Costello) for mixing.

“I love collaboration,” Luke explains. “When I started this album, I missed that part of the process. Dan enjoys the puzzle of music. He’ll have so many different versions of songs, whereas I’m more instinctual. It was nice to have Dan say, ‘We don’t need this!’ Dan saw the music from a bird’s eye view, maintained the momentum, figured out the puzzle, and pushed me to do more takes than I would’ve alone.”

At the same time, he found inspiration in a new instrument. A rubber-bridge guitar opened up the floodgates for Luke. He penned the title track “Dressing Like A Stranger” with the guitar and embraced it as a creative north star.

“‘Dressing Like A Stranger’ was the first song I wrote, and it unlocked the whole album,” he recalls. “The guitar has a very specific sound. I didn’t want just to do another ‘singer-songwriter acoustic’ thing. My first album was a shiny pop record, the second album was rawer, and my third album was more lyrical. The sound of the guitar was how I felt now.”

Also available now from the album are the tracks “Summer Somewhere”, “California,”, “Me And God” and “Blind Missiles” (“…a lilting lament for elusive empathy, textured with a master craftsman’s eye for detail,” The Sunday Times).