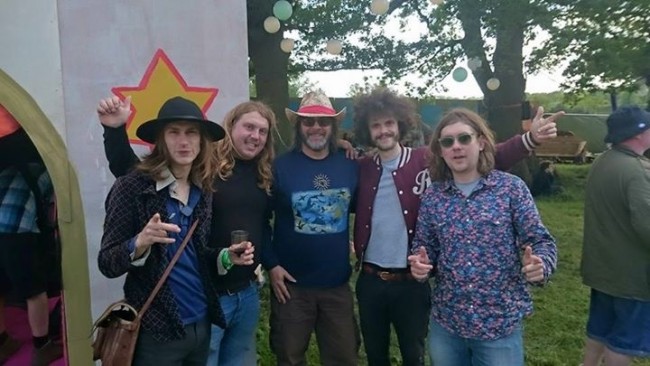 I’ve been a fan of these guys for a couple of years now but like with a fair few bands these days….the opportunity to see them live can be limited, needless to say I was excited and curious to see the guys on stage….could they recreate their wonderful album sound in the live arena?

Within the first few minutes of the set these thoughts were firmly put to bed…..this band can certainly play live and it’s clearly obvious that this is where they love to be, tracks like ‘Autograph’, ‘Hometown Blues’ and ‘Garden Of Time’ have an extra spring in their step….the band are a joy to watch, Lead singer & guitarist Liam Magill resplendent in his usual jaunty hat fronts the band in a quiet and laid back manner, drummer Fred Rother and Bassist Joel Magill provide a perfect rhythm section while multi instrumentalist Raven Bush completes the very talented line up.
It was a beautifully sunny day in Warwickshire and the bands track ‘Ode To The Summer’ just seemed to be the perfect tune for such an occasion…..the bands 3pm 45min set was a real master stroke from the organisers……the crowd really took to these four guys from Canterbury, and hopefully the merch tent was inundated with folk grabbing copies of their albums…..this band deserve to be much bigger…..I genuinely believe the next couple of years is going to see Syd Arthur go on to bigger and better things…..and while chatting to the guys after their set, they told me their new album is being recorded later this year….I for one cannot wait to hear it.