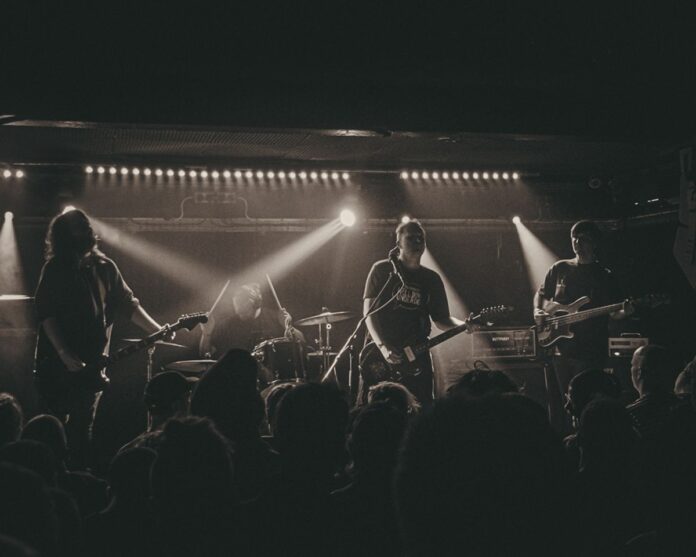 ‘PODHS’ is the first new material from the UK band following their acclaimed debut album, 2021’s The Live Long After. Despite the graphic title, the single is a stunning listen – a monolithic slab of post-metal, shoegaze majesty.

Sugar Horse have made their name on their dynamic extremes. In their own words: “Going from comedically quiet to annoyingly loud is a fun trick and something that rarely fails to force some kind of excitement into a song that is, let’s face it, just the note A over and over and over again. We thought we’d try going completely the other way with ‘Pictures Of Dogs Having Sex’. We wanted it to be a giant slab that’s just on like a fire hose for five minutes at a time. Just a relentless brick wall from start to finish, that may differ texturally from section to section, but ultimately is just holding a hairdryer to your ear. In keeping with said hairdryer motif, we made an admittedly ill-advised decision to include almost no instrumental definition. Much like My Bloody Valentine‘s ‘Loveless’ or The Cure‘s ‘Plainsong’, all the guitar, synth and bass layers merge into one giant wall of noise.

“Lyrically ‘Pictures Of Dogs Having Sex’ revolves around ideas of genetic inheritance and genealogy. The idea of some degree of my destiny being controlled by the DNA of two people (who in my case at least I’ve never met) is slightly terrifying to me. Am I living this way because I am consciously choosing to, or because I’m genetically programmed to? Oddly specific I know, but these are the kind of semi-tedious thoughts that knock around in my giant head (thanks genetics) from time to time.

“All together quite a commercial song for us….shame we destroyed any chance of said commerciality with the stupid title. Je ne regrette rien.”

Lyrically based around the fear of the unknown, Sugar Horse‘s The Live Long After is a caustic, visceral, and highly engaging listen. From the uneasy opening notes of the introduction ‘I Am Not Now’ (an anti-hymn based on an ancient Byzantine chant), to ‘Live Long’ (a doom track about the endless void) and ‘Death Cult’, (which discusses Aleph, the Japanese doomsday movement), the record is an indication of a band bursting with things to say.

It’s not for nothing that Sugar Horse have become known as a nonconformist band. Their previous EPs Druj and Drugs were acclaimed amalgams of doom, hardcore, stoner and punk, and The Live Long After continues this curious trend.

Indications of My Bloody Valentine, Cult of Luna, Deafheaven and Oceansize can be heard throughout the record, but still only touch upon the wide variety of sounds and influences Sugar Horse explore. A band who were due to tour with Black Peaks before the inevitable Covid disruption, and who have toured with Vennart and played ArcTanGent, Sugar Horse have received early praise from Upset Magazine, Metal Hammer, and Kerrang!.

Stream the new album, The Live Long After, here: https://sugarhorse.bandcamp.com/album/the-live-long-after