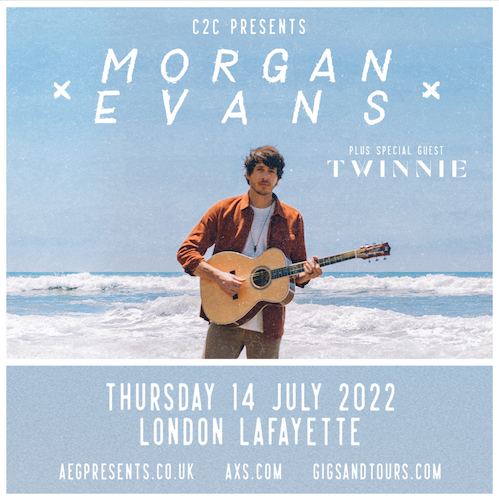 Australian-born star, Morgan Evans, is set to make his highly anticipated return to the UK next month, with a headlining show at the Lafayette in London. Following this show, he’ll join Brad Paisley to play two arena dates at the OVO Hydro in Glasgow and the 3Arena in Dublin, as part of a world tour which will also find them sharing the stage in the Netherlands, Denmark, Norway, Australia, and New Zealand. Tickets for Evans’ London show are available to purchase here.

The tour, which will be Evans’ first time back in the UK/Ireland since 2019, will see him performing fan-favourites along with songs off his new EP, The Country and the Coast: Side A (released in Oct ’21). After years of touring as a solo artist with a loop pedal, Evans teamed up with award-winning producer Dann Huff and returned to his roots by building his sound for the project around a full band experience.

Speaking on his return to the UK and Ireland, Evans says, “I couldn’t be more stoked to get over to play some more shows in the UK and Europe this year! I think the almost underground nature of Country music in those parts of the world makes for some of the most hardcore fans and most fun shows I’ve ever played!”

Evans’ recently wrapped a successful weekend at CMA Fest ’22 in Nashville, where he hosted an intimate Fan Party and played the highly coveted Riverfront Stage on Friday, 10 June. The set included Evan’s current single ‘Country Outta My Girl.’ Morgan recently teamed up with Weezer’s lead-vocalist, Rivers Cuomo, to release their take on the single – available to listen to here.

Already established as a global country force, the singer/songwriter and entertainer has also teamed up with Apple Music to share his global perspective on the country genre and showcase performers from all over the world on Country Wide Radio with Morgan Evans. Evans has toured with artists including Taylor Swift, Dan + Shay, Cole Swindell, Brett Eldredge, Old Dominion, Rascal Flatts and Chris Young in addition to sharing his own one-of-a-kind headline sets with sold-out audiences spanning eight countries across three continents.