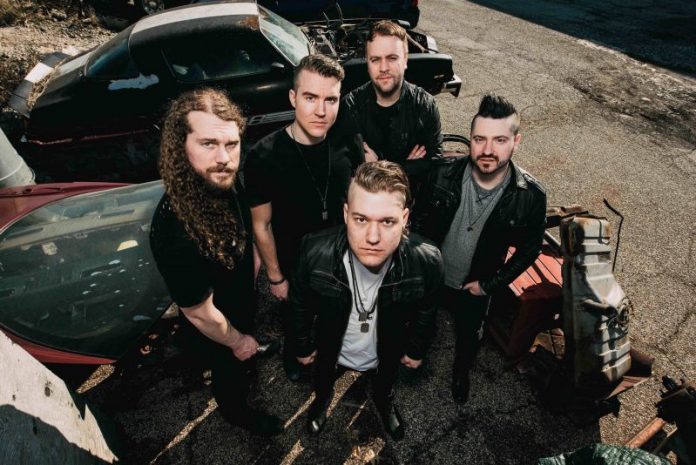 Ohio quartet NINE SHRINES will release their debut EP ‘Misery’ on Mascot Records digitally on 7 April and physically on 21 April.

Based between Cleveland and Columbus, Ohio – Nine Shrines dig deep to explore the nuances of contemporary metal, navigating through Metalcore, Alt-Rock and stadium sized choruses – Formed by former Attack Attack! Drummer Andrew Wetzel and Life On Repeat guitarist Andrew Baylis early in 2014, they are a band woven into the fabric of the explosive Ohio scene.

Their paths had crossed on a number of occasions on the road but the pair had never formally met as Wetzel explains; “I wasn’t sure I wanted to be in another band at first but we were talking for a couple of weeks after being put in touch by a mutual friend and he was living in Ocean City, Maryland at the time and had sent some demos over. He was recording and said he had a few weeks open in February, why don’t you come out here and we can start writing some music and see what happens. We had still not met in person and next thing I know I put a bunch of shit in my car, clothes and laundry basket and started travelling to meet this guy.”

Within weeks Devon Voisine, also ex-Life on Repeat joined on Bass, Guitarist Evan McKeever(Downplay/Before Their Eyes) had heard about the band and showed a keen interest in joining and as the trio began to find the sound they were looking for, McKeever was on board. After they auditioned for vocalists and Chris Parketny (ex-Stranger to Wolves) completed the final line up.

Between them in their previous bands they had toured the world over, had critical and commercial success (the last Attack Attack! album ‘This Means War’ went to #11 on the Billboard charts)experienced the highs that come with that but also the lows that cause bands to collapse. From out of the ashes of Attack Attack! Caleb Shomo formed Beartooth and Austin Carlile went on to form Of Mice and Men.

Talking further Wetzel adds “By the time Baylis finally reached out to me I had months to think about it and grieve I suppose and between our mutual friend prodding and that was pretty much the exact moment he text me and I thought why shouldn’t I do this. I’m not trying to convince myself I shouldn’t pursue music anymore.

It was from here that the seeds of the ‘Misery’ EP were sewn.

All of it the good the bad the ugly of their life to this point shaped the song-writing on ‘Misery’. Hitting the road as teenagers and not fully returning home for years, challenging themselves and gaining perspective through trial by fire gave lots of similar ideas and experiences of how much work it takes, how hard it is and how much perseverance is required and because of that it’s a record that drips with emotion and defiance.  “When we first started writing we didn’t really have any idea what we wanted to do, we just would write anything. The first songs were all over the place searching for the sound we were looking for”he recalls.

After searching and experimenting, ‘King of Mercy’ became the sound they were looking for as Wetzel explains; “It’s for people that have been walked on their whole lives. We’ve all had a time when we felt like our sole purpose was to bend over backwards so everyone around us could get what they want. This is a very personal song for us. Some people don’t deserve forgiveness and this is the anthem of our retribution.”

The record follows this theme; ‘Parasite’ was the next song written is based on personal experiences and is an ode to those who deliberately create problems, “you’re not my saviour, you drag me down further, you take away the only thing that isn’t killing me” they sing.

“We didn’t really set out to create a theme” explains Wetzel. “Once we wrote ‘King of Mercy’ we were like ok, and as we went on we saw ‘Misery’ take shape as a whole, it became a statement,  an explanation of how we got here, a curated series of things that have occurred previously for all of us that has led up to this.”

‘Bend’ is another heart on sleeve moment, about a personality we all encounter in life, someone that say one thing and do another and leaving the blame on your door – “I knew the games you played, but I still let you win” they confess. ‘Lost’ is about the struggles of pressure and self-destruction; a story of someone with a drinking problem that gets in to a car accident and someone they love dies. Whilst ‘Misery’ is about jealousy and how it manifests in an abusive relationship.

When it came to titling the record, ‘Misery’ fit perfectly – it summarises all the different themes that play into the struggle of putting your heart and soul into something and the world that builds around and within that. Self-produced, it’s the sound of a band refreshed, reignited and harnessing the rawness into intricate and cathartic snapshots, the album artwork ties into the heart of the album depicting someone having their soul sucked out of them. “That’s really how it feels sometimes when things start going the wrong way”adds Wetzel.

With only a handful of shows under their belt but two of those being with Halestorm and the torrential downpour flooding baptism with Volbeat they are already coming out the traps full force. Already with a collective lifetime of ammunition and experience ‘Misery’ is only the start.