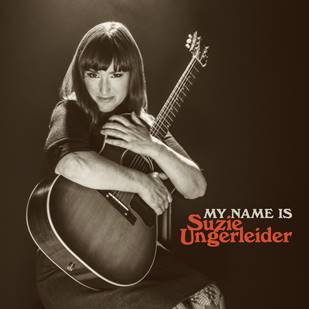 Following the release of her acclaimed album ‘My Name is Suzie Ungerleider’, three-time Canadian Juno Award nominee Suzie Ungerleider has announced a string of 2022 UK shows in an extension to her North American tour. Beginning on 1st June at London’s The Water Rats, the tour marks Suzie’s first performances in the UK of her new music.

Sharing her excitement towards a much-anticipated return to UK audiences, Suzie said: “To come play live in the UK again and to share new songs, as well as old favourites, makes me very happy.  I’ve always felt a special connection with the folks in the United Kingdom with their appreciation of dark humour, stories, and love of language.”

Met with critical acclaim and earning Suzie her third Juno Award nomination, ‘My Name is Suzie Ungerleider’ is the first album since the artist formerly known as Oh Susanna announced that she would now record and perform under her birth name.

“Thoughtful lyricism, the sound of a woman confident in her artistic path”
– The Arts Desk

Bursting with trademark evocative melodies and trenchant lyrics, it’s the tenth solo studio album by the American-born, Canadian-raised artist revered for such landmark records as Johnstown, Sleepy Little Sailor and A Girl in Teen City. The decision to say “so long” to her long-time moniker Oh Susanna represents her recognition that the “exciting, dark, funny, charming” character that she thought was Oh Susanna was actually Suzie Ungerleider all along. “So here I am, leaving behind the trappings of a persona that gave me the courage to climb up onstage and reveal what is in my heart,” she reflects. “It once protected me, but I need to take it off so I can be all of who I am.”

The name change is both a personal and political decision, fuelled by her realisation that ‘Oh Susanna,’ the Stephen Foster song of 1848, contained racist imagery and a belief system that she wanted no part of. She came to understand its historic associations to Minstrelsy, a tradition both demeaning and dehumanising to black people. Leaving Oh Susanna behind, she’s become her true self with a wonderful record that marks a fresh beginning, a collection of new compositions that refresh and redefine who Suzie Ungerleider is.

“Ungerleider remains a superlative scene-setter and story teller, with a voice managing the rare combination of being at once delicate and careworn.”
– Uncut magazine

Audiences will be treated to album highlights such as characteristically searing ‘Baby Blues,’ a song about how the traumatic events we witness when we’re young can haunt and indeed shape our older selves; ‘Mount Royal’, a folky Americana tune with roots influences that follows another personal tale from the chronicles of Suzie’s life, and ‘Pumpkins’, about that darkness in the soul that is so beautifully reflected in the decay of Autumn.

Now based again in her home town of Vancouver, she made My Name is Suzie Ungerleider with producer Jim Bryson, whose assured touch amplifies the atmospheric dreamscapes contained in Suzie’s reflective, intimate songbook.