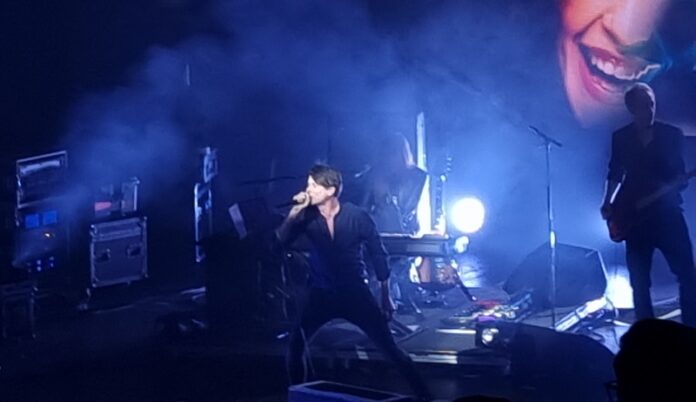 The boy isn’t wrong. Dressed in black, and looking fitter and healthier than his 54 years, he still looks as much of a frontman as he did when I last saw the band, it’s 22 years ago, almost exactly.

Discussing the history of the band seems apt tonight, given the nature of the gig. We – and do not doubt the fact the Academy is heaving – are here, in the main to celebrate “Coming Up”. An album that was released – give or take a couple of months – came out 25 years ago.

It was, and it might be the case for a lot of people, was the record that got us into the band. I’d have been 21. These were the day-glo, drugged up glam stompers that were saving rock n roll along with The Wildhearts.

As ever, with these the best songs, they never date. And there’s four or five diamond plated classics on it. They play them in order so after “Trash”, there’s “Filmstar” (still a personal favourite) “Beautiful Ones” and an absolutely massive sounding “Saturday Night” to finish it off.

Its interesting to watch this with Richard Oakes playing these riffs, because if nothing else Suede are a guitar band. The reasobn for that is simple: say “Suede” to people and they’ll think Bernard Butler is as much part of the band as Anderson, and yet he’d gone by ’94. Oakes has been the man since then and he’s in absolutely brilliant form tonight, he really is.

Split into two halves, the second half is a surprise, as they trawl a bit of the back catalogue. Whether you enjoy this bit of the show or not depends on these words: “lets go back to the heady days of 2013…” yells Anderson. To be fair, he’d also nailed it. “We’re gonna build this part” he’d explained.

It’s paced brilliantly too. Starting with “Sadie”, a fabulous “Sometimes I Feel I’ll Float Away”, and the crescendo starts to come “Can’t Get Enough” is a real, genuine, punk rock highlight, an absolute soaring thing. Through the miracle of the internet I can tell you that they’d opened that night in Wolves with it, and it’s a song that deserves that type of billing.

The last four make good on the promise to “build”. “We Are The Pigs”, “So Young”, “Metal Mickey” and the one you knew they were going to end with “Animal Nitrate” – still an anthem that should really have been sung in stadiums.

As they sing it, I look around the crowd. There are people of all ages. Those who were there before me, those who were there after me and their kids. I guess it happens with all classic bands, but it really does seem as if these are tunes that have been passed down the generations.

There’s an encore too, and “New Generation” ticks all the boxes for what you’d need, and it’s interesting that Suede, of all those mid-90s bands, seem to be the outsiders. Three number one albums, genuine connection and huge sounding things.

It’s a tag that suits them too, given the fact it gives them the freedom to do whatever they want to. 30 years as a proper rock n roll band. They only deal in big, and they are asking for no one’s approval. They don’t need it. They always come back, after all.