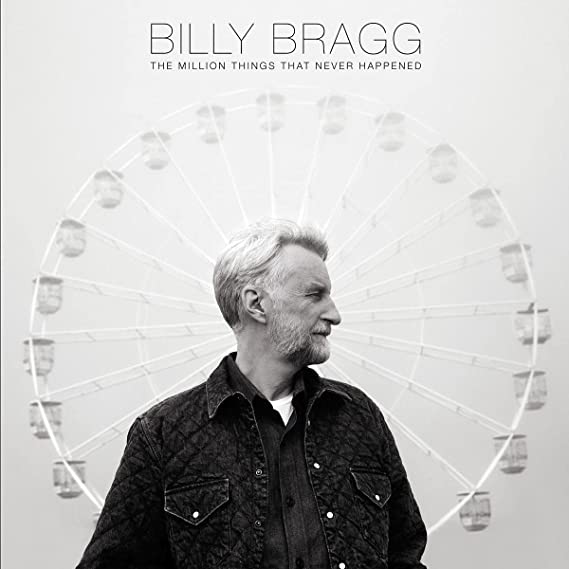 In early February 2020 my eldest niece was one year old. The family gathered for a little party. There were three generations of my sister-in-law’s clan there. A year later, when she was two, we were all on zoom eating cake. And one of those generations was no longer there. At 98, she was a Covid statistic.

When Billy Bragg talks about “The Million Things That Never Happened” here, that’s what I think of, never mind the gigs I didn’t go to, the football matches I should have been at being played behind closed doors, or the fact that by October 2020 I was in such a bad place that I could no longer cope without help. No, I think of the human cost of this past 20 months.

What is interesting about this collection is that it is a “pandemic” record, but one very different to the one that “Chop And Clang” Bragg as he dubs his early days, would have written. God knows there’s enough material for a socialist to get stuck into. Maybe, just maybe, though, he understands that whatever he says these days, Johnson and his mates will always – to paraphrase Nye Bevan – be lower than vermin, and he’s more interested in the – here’s that phrase again – human cost of what they left behind while they were getting rich.

Certainly, there’s a warmth about the songs and an empathy either from, or towards, the characters in these songs.

“Should Have Seen It Coming” is laid back, convivial start. The person narrating (and that’s the best way to think of these) is too busy to realise what is going on until its happened, which is at odds with the feeling in the second one “Mid Century Modern”. Almost the perfect “latter day” Bragg song, full of bombast, but crucially questioning himself: “Positions I took long ago feel comfy as an old armchair/But the kids that pull the statues down they challenge me to see/The gap between the man I am and the man I want to be.”

Look at that verse, and you realise it’s been going on since his “William Bloke” days. Remember “Brickbat”? “I used to want to plant bombs at the Last Night of the Proms/But now you’ll find me with the baby, in the bathroom, With that big shell, listening for the sound of the sea.” Things change, views alter. That doesn’t make you a “sell out”.

There’s some moments of true beauty here, there really is. “Lonesome Ocean” could have been on one of those wonderful “Mermaid Avenue” records he made with Wilco and the piano of Romeo Stodart (The Magic Numbers) who co-produces here is as haunting as it gets. “Good Days And Bad Days” sees Bragg find his old voice (literally) for a rumination on depression. “Just give me something I can fix my eye on” he sings in the chorus – and trust me here, if you understand what he’s talking about then I empathise.

There’s some lighter moments too. “Freedom Doesn’t Come For Free”, takes down pernicious Libertarianism in about three and a half minutes, sounding like a Woody Guthrie song, but done in a way that is full of genuine fun. A feeling that “Reflections On The Mirth Of Creativity” carries on. A celebration of a good day – albeit with a title that would make Pink Floyd blush – it is the shaft of light that sometimes happened in that lockdown.

The title track, with its mournful strings, is by necessity bleak, while “The Buck Doesn’t Stop Here No More” doesn’t so much deal with Trumpism, but again, the consequences of populism on society.

I saw Bragg play most of these songs the other week, and he consistently talked about cynicism in his set and how we needed to do what we could to guard against it. “I Believe In You” is a powerful thought on that subject. In many ways, the one that follows “Pass It On” – which Bragg had explained was about tracing his own history to better understand his place in the world – takes that idea a stage further and “I Will Be Your Shield” kind of completes the triumvirate, by making you understand you are never alone.

“Ten Mysterious Photos That Can’t Be Explained” (co-written with his son Jack Valero) ends things on a wonderfully catchy note. Paraphrasing George Orwell, before deciding: “Common sense, like art, is in the eye of the beholder” he sings as he tries to navigate through what we used to call The Information Superhighway”, and concluding: “you know you can overdose on information?”

At that gig last week Bragg had said that the beauty of music was that when it connected with you there was nothing better. That’s why I wrote the intro I did, and that’s probably why he wrote these songs in the way he did.

No one describes the human part of the human condition better than Billy Bragg, and this is a modern piece of brilliance that is both different to his early work, yet somehow absolutely part of the lineage.