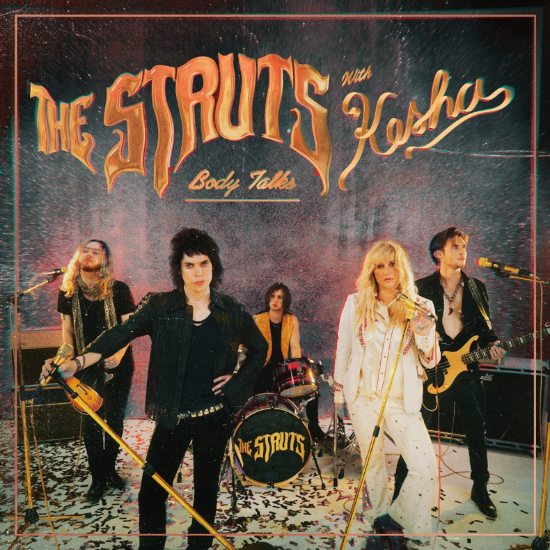 The Struts have partnered with Grammy nominated pop superstar Kesha to release a bold, enhanced version of their hit single ‘Body Talks‘. A long-time fan of the band, Kesha joined The Struts in a Los Angeles studio to re-record the tune lending her vocals and unique style to the song.

“I’m so excited to release ‘Body Talks’ with The Struts!!!” says Kesha. “They are one of my favourite current bands keeping the spirit of classic rock and roll alive with their wild energy and sexy style. It’s a song made for my favourite activity: boogieing.”

The Struts recently completed a tour supporting the Foo Fighters, which included a performance at Madison Square Garden, ahead of their own Autumn headline tour. The Body Talks Tour starts on September 21st in Detroit with shows already sold out in major markets. Tickets are on sale now. Visit thestruts.com for all tour dates and to purchase tickets.

In just a few years, The Struts have found themselves embraced by some of the greatest icons in rock-and-roll history. Along with opening for The Rolling Stones, The Who, and Guns N’ Roses, the U.K.-bred four-piece was hand-picked by Mötley Crüe to serve as the supporting act for their last-ever performances, while Dave Grohl praised them as the best band to ever open for Foo Fighters.

Formed in Derby, England in 2012, The Struts are Luke Spiller (lead singer), Adam Slack (guitar), Jed Elliott (bass) and Gethin Davies (drums). The Struts are currently working on the highly anticipated follow up to their 2016 debut, Everybody Wants, which will be released on Interscope Records this Autumn.

ABOUT KESHA: Kesha’s latest album ‘Rainbow’ debuted at #1 on the Billboard 200 chart, was called “an artistic feat” by Entertainment Weekly and “the best music of her career” by Rolling Stone, and earned the singer/songwriter the first GRAMMY nominations of her career at this year’s ceremony where she also performed the nominated single ‘Praying’. This year she was also named one of Time Magazine’s Time 100, their most influential people in the world, just completed a nine-week, 30-market co-headlining tour with Macklemore, and also just released the behind-the-scenes documentary Rainbow – The Film on Apple Music (produced by Magic Seeds Productions) which she directed along with her brother Lagan Sebert and Kevin Hayden.