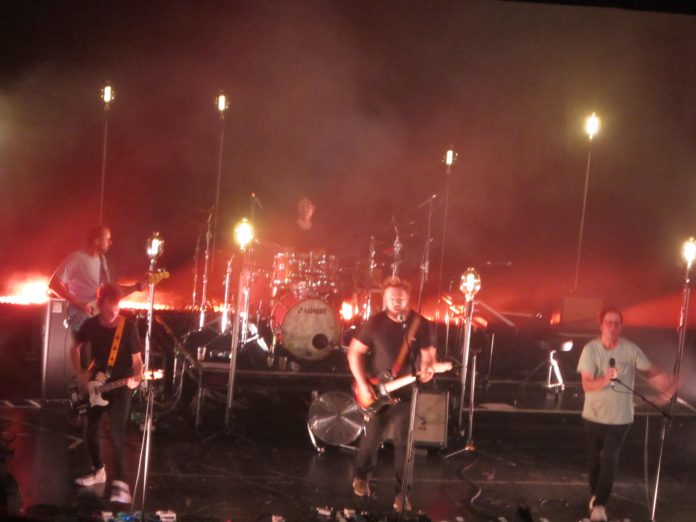 It seems the prevalent thing these days that a band release an album and then after a significant milestone, they re-release it and tour the offering in its entirety. I was a little taken aback when I realised that Gomez`s debut album `Bring It On` was indeed twenty years old.

Then finding that having added some additional dates to this album`s twentieth anniversary tour they were heading to my hometown to celebrate. I must admit this is an excellent and varied work especially for a debut album and it did indeed win recognition, gaining the band a Mercury Music prize for their efforts.

The track `The Comeback ` is piped through the pa system as the band come on stage and we are then treated to the album, in sequential order for the next hour. The packed audience are enraptured from the start of opening track, the five minute almost hypnotic, blues type refrain of `Get Miles` to the concluding ten-minute epic track `Rie`s Wagon` over sixty minutes later. Highlights for me were the wonderful `Whippin` Piccadilly` with its laid-back vocals and mesmerising guitar accompaniment, heart breaking `Tijuana Lady` again highlighting intricate guitar picking and `Here Comes the Breeze` with its memorable sing a long hook of “Send a little message to ya, Gonna get out of our heads”

The crowd were undeniably captivated with all eleven tracks that were shared, with `Get Myself Arrested` getting the heaving masses jumping up and down and singing come chanting along. These fellas didn`t really come up for air once this landmark opus had been shared but continued to entertain the throng with the quirky `Shot Shot`, poppy `Silence`, ballad like `We Haven`t Turned Around`, idiosyncratic `Blue Moon Rising` and closing the show with the beguiling `Bring it On’.

It doesn`t take long for the guys to be encouraged to return and share another couple of tunes. The almost psychedelic `Revolutionary Kind` and an up-tempo, dance like version of `Whippin` Piccadilly` which had the faithful, screaming, shouting and generally going crazy. A cracking way to end the show.

I wasn`t sure how the group would put over such a diverse album in a live situation, as the music covers wide ranging genres such as blues, indie, alternative, rock, folk, psychedelic and experimental but they managed it to aplomb.