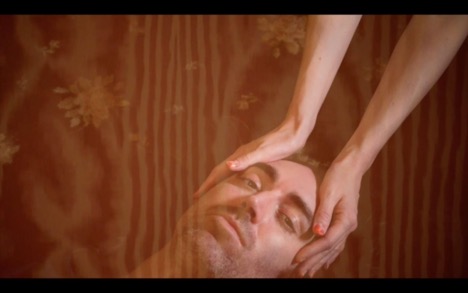 They’re also sharing a new music video for ‘Playing the Part’ directed by Heather Bickford to celebrate the vinyl release of Hologram.
As noisy as they can be, there’s true prettiness in the APTBS sound. Sometimes it’s buried in the hypnotic mixes, and sometimes, it’s right there on the surface. ‘Playing The Part’ is one of the most winsome things the group has ever recorded — it’s got a glorious guitar tone, an active, melodic bass line, and a graceful vocal from Ackermann that could legitimately be called sweet. Director Heather Bickford has matched the song with a video that underscores its beauty, and its strangeness, too. Bickford, who also stars in the clip, shoots Ackermann in a historic house in Flagstaff, Arizona that looks like something out of a reverie: there’s antique wallpaper, stained glass windows, curio cabinets stuffed with bone china, landscape paintings in gilded frames, and velvet drapes over the bed. Microphone in hand, thoroughly bewitched, animated by the enchantment of his surroundings, Ackermann slips into a dream.

Bickford elaborates: “‘Playing the Part’ was shot in Flagstaff, Arizona, on Oliver’s birthday, while Ollie and I were on a little getaway last November. He had actually proposed to me the day before while we were at Zion National Park so we were in a dream-like state of mind. Shot in a historic home, the vintage decor and wallpaper provided the perfect backdrop for the video.”

This Fall, they’ll support Future Islands on select dates, and, in early 2022, the band will tour across North America before heading to Europe. Tickets for all dates are on sale now.