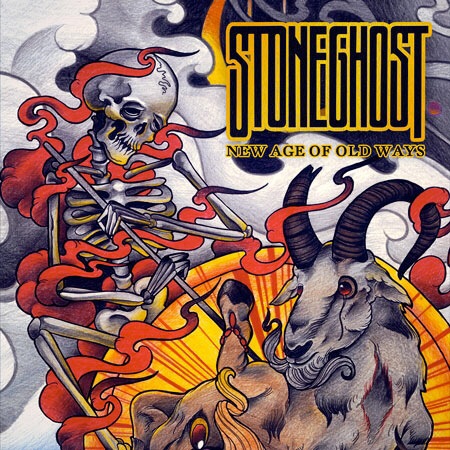 Reactivated and re-energised Londoners make their return to the fray

The story of how Stoneghost got here is nearly as interesting as the record itself. Formed in 2007, they were playing Bloodstock two years later, then the main stage the year after that. Wacken and Hammerfest slots followed and then…..well, then it all began to unravel. Singer Jason Smith began to doubt whether he could even do this anymore.

A couple of years later, though and you’d never know it. The band are back and with a major label deal in their pockets no less, the patronage of Metal Hammer behind them, but more importantly than any of that, a killer new album on their hands.

“New Age Of Old Ways” is a very heavy heavy metal record. But it is not from the Iron Maiden school of things. Instead it comes on like the adrenaline fuelled bastard son of latter day Lamb of God playing early Machine Head. If Ronnie James Dio wanted horns up, Stoneghost want to bloody your nose with their fist.

Opening salvo “Faceless Ghost” does just that, packed full of groove, you can almost sense Smith ridding the demons of the last few years right here. And the chorus here has half an eye, you suspect, on field full of festival goers this summer, likewise the machine gun riffing of “Devils Motion” is just anger set to loud music and proves this is deadly serious, and moreover the opener wasn’t a fluke.

“……Ways” benefits from having Russ Russell at the production helm. Russell can make a heavy metal record sound good in his sleep, but on this he has excelled. The thing sounds humongous. It sounds clean and precise, this is not the album of band who wants to play loose, this is tight and absolutely polished. The drum sound for example is ridiculously big.

There are moments of light and shade here too “Sleeper” slows things down, but involves a monstrously heavy middle section which sees Smith show of his range and guitarist Andrew Matthews really take centre stage, while “Let Sleeping Beasts Lie”(which closes the album) is acoustic led, simmering song.

But when they want to do heavy, you best believe Stoneghost deliver. “Your Trigger, My Finger,” for example, is nothing more than a fine thrash modern thrash metal song and the Pantera like feel on “Third Degree” makes it one of the album highlights

What Stoneghost have done on “New Age Of Old Ways” is to create a template for exactly how a cutting edge heavy metal record should sound in 2015. If this was an American band, we’d be fawning all over them desperately trying to make them the next big things. Stoneghost deserve the same treatment.