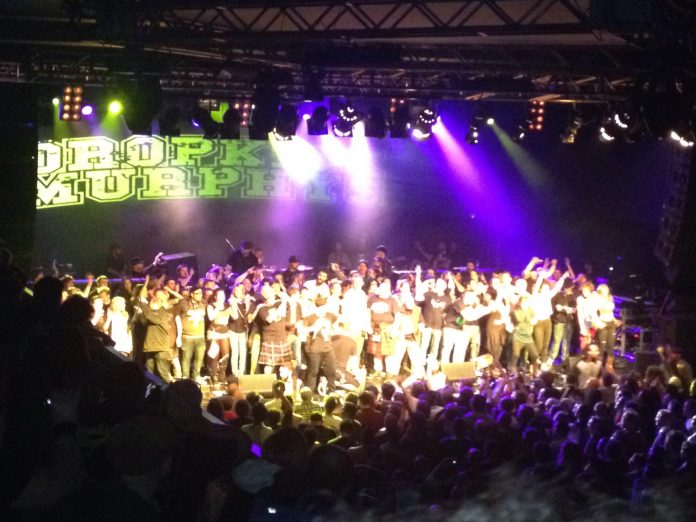 Kiss them, they’re shitfaced. The St Patrick’s Day parade hits Birmingham five days too late as the Dropkicks end their World tour in the second city.

It’s a mighty long way from South Normanton Miners Welfare Club to the Academy, Birmingham, as Mott The Hoople might have said. That’s the journey that Resistance 77 have done, though, in the 36 years since their first gig. Not as Celtic as the other three bands and possessing slightly more of a clenched fist, there is a lot to enjoy about songs such as “No Escape” from their soon to be out new record. Original member Ian “Oddy” Hodson is still there and his energetic  performance is a highlight, and the title of their last song speaks for itself: “True Punk And Oi Will Never Die.” Indeed.

In many ways, as good as Resistance 77 were, there’s a feeling that the gig really begins with Blood Or Whiskey. For one thing they are from Dublin, for another there’s lots of them and one has a flute and accordion. Sorted. Billing themselves as The Clash meets The Dubliners, you can see what they mean. “No Answer” is raucous and the “Irish rebel reggae” of “Seanie O’Keefe” gets the party started. “They Say No” is happily unfocused and they manage to get going the friendliest circle pit known to man. Things end with a political message (kinda). Successive governments have taken the fun out of pubs, apparently. And in so doing have robbed the working man of his sanctuary. Blood Or Whiskey have done something about it. They’ve written the song “Poxy Pub” to fight back. It is – like the band – drunken fun.

Speaking of which, The Mahones are here and they are the very epitome of drunken fun. The Canadian’s not only have a song called, rather helpfully, “A Great Night On The Lash.” Even better it actually sounds like it might have been written during one. There is better musicianship here than that, in fairness, and the interplay between vocalists Finny O’Connor, who also hammers a guitar and Katie Kaboom, who fair old rocks the accordion is excellent. “Shakespeare Road” sees hands in the air all over the place. “The Hunger And The Fight” is dedicated to the band’s old bass player, but is followed with “Drunken Night In Dublin” no doubt for pissheads everywhere. There does appear to be a theme here and any set that ends with a track called “Drunken Lazy Bastard” probably isn’t the most po-faced you will ever see. The Mahones have been doing this for a quarter of a century and when you think about it, that’s a shitload of hangovers. And kudos is theirs for the Celtic version of “Paranoid.”

The chants of “Let’s Go Murphy’s” start up 15 minutes before the Dropkick’s are due on, and there is a palpable sense of anticipation by showtime. Time, it seems has done nothing to diminish the appeal of the Kings of Celtic punk.

The giant video screen behind the stage only has to flash their name to send Birmingham into raptures. When you’ve got the crowd eating out of your hand before you even start its not a bad place to be in, is it? With that a lone piper appears for one last moment of calm…..

…..Because once the Dropkick Murphy’s hit the stage there is very little calm anywhere, but then there’s a reason the seven men that make up this band are so popular and it’s frighteningly simple: the band are extremely good at playing live.

This is the very last night of their mammoth world tour, and they are in end of term mood, which means a breakneck set – apparently written by the crew – which takes in just about everything you’d want it to. “The Warriors Code,” “There’s Gonna Be A Blackout Tonight” and “The Boys Are Back” are past in a blur and we aren’t even 10 minutes in.

They even find the time to chuck in a couple of covers, and “Alcohol” originally by Gang Green is suitably charged up and grimy and the Stiff Little Fingers make an appearance before the end too.

But there’s a lot more to this than straight up punk. There is a folky element here which sets Dropkicks apart, with banjo as likely as guitar and the presence of the aforementioned piper, Scruffy Wallace, adds to the feel. Of course Murphy’s also use two vocalists better than most with the Jack in a box antics of Al Barr the perfect foil for Ken Casey. Oddly, perhaps, it’s one of the songs that Casey sings alone, the acoustic driven “Rose Tattoo” that provides one of the highlights here, while the heartfelt ballad “Forever” is delivered as a communal sing-along.

As well as being fine punks and superb folk players The Dropkicks are one of the more politically active bands around. Mighty proud of where they are from”The Streets Of Boston” is full of feeling, as is “Time To Go” which is dedicated to the Boston Bruins hockey team (according to Casey they are best team on the planet – we’ll take his word for it.)

There is a veritable hurtle to the finish line, “Citizen CIA” is aggression writ large, “The State Of Massachusetts” is a cross between a punch in the face and an Irish Jig and the main set closes the headliners and the two main supports onstage together for “Shipping Up To Boston.”

When they return its with “Baba O’Reilly” and The Who never did it like this, but there’s no time to reflect on that before the crowds female contingent decamps to the stage (the big screen reads “only a jackass takes selfies on stage”) and its “Kiss Me I’m Shitfaced” time, and there is not a band more together with its audience – at least until the male ones join them for a few more including “TNT” to make it even more inclusive.

Frank Sinatra plays as we file out. To paraphrase the great man, The Dropkick Murphy’s do it their way. Many have tried their hands at crossing Irish folk and punk, but no one does it as well. Tonight a rather ugly looking, drab building on the edge of England’s second city placed on one side of a duel carriageway, was turned just a little bit Emerald Green.