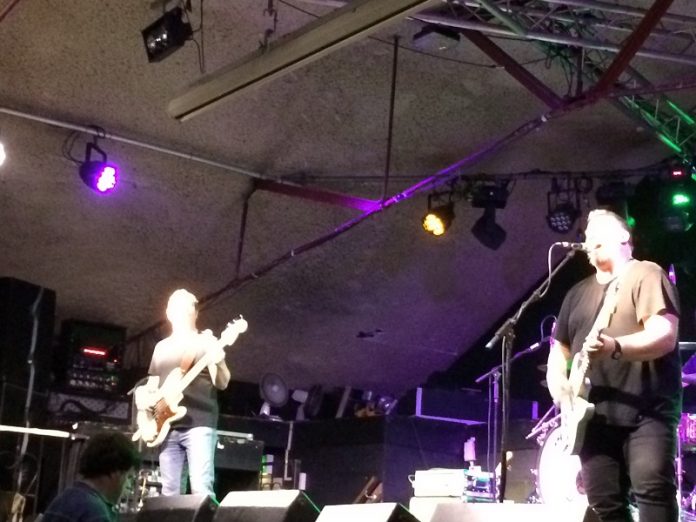 A good day for the blues….

Kriss Barrass and has band have driven from Devon for this. Six hours on the M5 no less, it’s enough to make anyone long for their 40 minutes on the stage, and the four here attack opening song “Never Too Late” with the glee of people who have been released from motorway hell. Indeed, there is an ebullience about KB and his troupe that suggests they rather like playing live whatever the circumstances. A prodigious guitarist, and with a set predominantly made up of tunes from this spring’s “Lucky 13” opus, Barrass oozes confidence. Whether its “I Can’t Help You Now” – which he says is one of his favourites to play – or the emotional “Watching Over Me”, written for his late father, there is a class here. With his modern, styled beard and heavily tattooed, Barrass is anything but your archetypal blues man. He acknowledges this fact with his last song. “Rock n Roll Running Through My Veins” is a heavy, grooving thumper and it seems to sum up what has just happened. The trip, thankfully, was worth it.

Another man to release a record in the early part of 2016, Stevie Nimmo is returning to The Robin for the first time in a decade. This time he’s back with the absolutely astonishing “Sky Won’t Fall” under his belt, which even in a year as good as this one for Blues Records, is probably the best so far. When last MV saw him the record wasn’t out. Now some nine months later, and with a thorough road testing, its cuts are fast becoming classics.

Opening pair “Roll The Dice Again” and “Still Hungry” are simply rollicking good rock songs, while things become a little more mournful on “Running On Back To You” (“probably the bluesiest I get these days” he says). Largely, however, its upbeat and done with a grin, which allied to this much skill makes this quite something.

The Allman Brothers’ “Gambler’s Row” is turned into a showstopper and there are a couple of glorious forays into the first Stevie Nimmo solo record, notably for “Good Day For The Blues” which – along with the summery “Lovin’ Might Do Us Good” are as uplifting as could be.

There’s an encore, of course, and Stevie Ray Vaughan’s “I’m Goin’ Down” is bang on target (granted, it would be more or less impossible to mess it up, but a trio this good was never going to anyway) but the real key to this evening lay in a speech Nimmo gave before launching into a charged-up “Change”. When artists get to a certain level, he suggested, they are told to alter what they wear, what they say and even their sound. His riposte to this says everything about the Glaswegian. “I love this” he says. “And as long as you people are here, I will continue to be true to myself”.

If that’s a clue as to why this is one of the most honest, blues gigs you’ll see, then the reason why Nimmo is so engaging comes later. Explaining he’ll be at the merch stand after the show he adds: “whether you buy anything or not, it’s cool. Just come for a chat. Unless you want to say ‘that was shit, big man,’ then you can keep that to yourself.”

It’s a fair bet no one did.

Previous article
Bigger Mass Than Ever Before
Next article
Featured Band: Painting Rockets