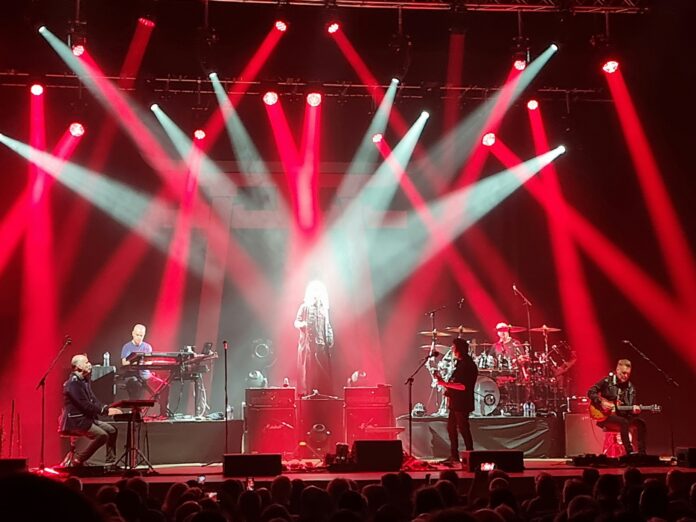 As he referenced it himself, we’ll kick off with it too. “You know,” ponders Steve Hackett as he talks to the crowd in the first set. “We’ll be playing ‘Supper’s Ready’ in the second half….I always thought it would be the perfect length for a single.”

Fast forward a couple of hours and they play it. It is transcendent. There is something special happening on this stage, right here, as  Steve Hackett and his band lock into some telepathic understanding of this most labyrinthian thing.

If that is the star turn – and in the last solo Hackett lives up to the shout from the stage from Rob Townsend that he’s the “greatest guitarist in the world” – then its only one of many.

Tonight is billed as “Foxtrot And Highlights”. The truth is the highlights are everywhere, as even for Hackett he’s in form. He’s sublime on “Ace Of Wands” and the only song he plays from what we might term as the “newer” end of his repertoire “The Devil’s Cathedral” is billed by him as “a musicians workout” and fits into the canon perfectly.

Hackett seems totally at ease too, and he always seems to enjoy playing this room. He talks about watching wrestling with his dad at the Royal Albert Hall and compares it to the environs he occupies now. Certainly the sound is perfect and the light show spectacular, which allows the likes of “Spectral Mornings” to shine. A thought strikes in that one and “Every Day” which follows. The album they came off was released in 1979. At the tail end of punk and how timeless they sounds now.

“A Tower Struck Down” – even earlier in its inception – is filled with wonderful keyboards from Roger King and it is then you realise, perhaps that although this is a solo gig, then its really a band one, and Hackett is content to let each member shine. Craig Blundell on drums and Jonas Reingold on bass get moments here for example, while Rob Townsend, on all kinds of brass and other things, is integral throughout.

“Shadow of the Hierophant” though, is pure Hackett. Wonderful playing and a fine way to end part one.

Part two, of course is the dance with “Foxtrot” as your partner. That means Nad Sylvan – who had been in and out of the opening – is front and centre and here is a man who brings a sense of theatre to all he does. Even walking onto the stage is an event, never mind his telescope in “Watcher Of The Skies”.

“Time Table” is light and airy, the piano bright and breezy, while the kaleidoscope of sound that is the show, but this album in particular is, is never better shown than by following it up with “Get ‘Em Out By Friday”.

Hackett plays the acoustic solo for “Horizons” as a palette cleanser, almost to get us to “…..Ready” and anyone who wasn’t there for the original days can only surely marvel at it here. Genuinely stunning, a near 25 minute suite of bravery, ambition and consummate skill.

There’s an encore, and “Firth Of Forth” very nearly takes the accolade of song of the night, Before the medley of “Myopia / Slogans / Los Endos” allows us, one last time, to marvel at one of the finest prog rock bands there is.

And by that I don’t mean just the one who wrote “Foxtrot” and who’s DNA is all over this. I mean Steve Hackett and the assembled crew that acted as the vehicle for this most incredible of journeys.