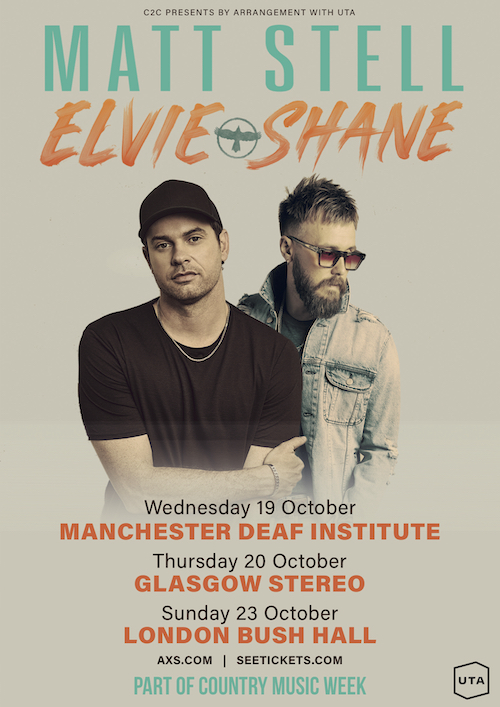 In only the last three years, “versatile” (Billboard) artist Matt Stell has quickly made his mark on country music, amassing over half a Billion music streams across his catalogue, including back-to-back U.S. No. 1s ‘Prayed For You‘ and ‘Everywhere But On‘ along with fan favourites ‘Boyfriend Season‘ and ‘That Ain’t Me No More‘.

Today (30/9), he shares a brand new track, ‘One Of Us‘, written by James Barker, Travis Wood, Gavin Slate, and Jim McCormick and produced by Ash Bowers and Stell and available to stream/download everywhere. The release coincides with the first night of his 17-city U.S. headlining Man Made Tour 2022, with Matt also due to return to the UK for the second time this year, on a co-headlining Country Music Week tour with Elvie Shane. For tickets and information, check out mattstell.com.

Listen to ‘One Of Us’ here.

Following his early success, he has since made his Grand Ole Opry debut and performed on “Good Morning America,” “The Kelly Clarkson Show,” “The Late Show with Stephen Colbert’s” #LateShowMeMusic digital series, “Bachelor In Paradise” and sung the national anthem for NASCAR and NFL events. He launched his Give A Damn Foundation, kicked-off his hugely successful 8-week Instagram-live series, Penned Up, and was the first-ever artist to receive a virtual plaque from the RIAA for “Prayed For You,” which is now approaching 2x Platinum status, and is an ASCAP Pop and Country most-performed song awards winner.

The 6’7″ Arkansas native has come a long way from playing college basketball for Drury University and making the choice to head to Nashville instead of Cambridge, MA where he was accepted into Harvard University’s Extension School Pre-Med program. Following his dream of writing and performing, the self-taught vocalist and guitar-player made the move to Music City in 2014, landing a management deal with Wide Open Music and a record deal with music industry powerhouse Barry Weiss’ RECORDS Nashville. Stell has received “Ones To Watch” shout-outs from multiple partners, including Vevo DSCVR, MusicRow‘s Next Big Thing, CMT Discovery Artist, YouTube Music Artist on the Rise and more. Upcoming UK dates: