STEELHOUSE HAS THEM FLOCKING 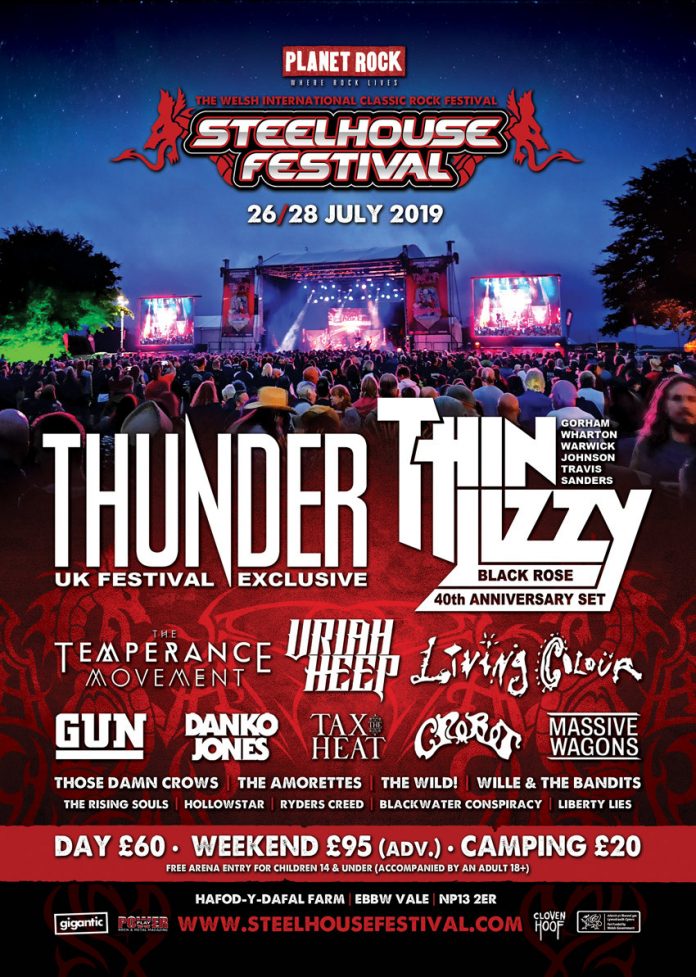 Fans are flocking from all corners of the earth to this year’s Steelhouse Festival – the ninth – which is running Friday 26th – Sunday 28th July. Ticketholders have been identified as coming from Japan, Israel, Australia, Germany, USA, Spain, Finland and Abergavenny [the latter being less of a surprise]. Many are making returns to the festival which has gained a superb reputation for delivering great and often exclusive music in a unique atmosphere.

Thin Lizzy is playing Black Rose live in its entirety has never been done and is a worldwide exclusive.  Lizzy will have Troy Sanders from Mastodon playing bass, drum duties will be handled by Scott Travis of Judas Priest and keyboardist is long time Thin Lizzy member Darren Wharton. They join Ricky Warwick, Damon Johnson and the lynchpin Scott Gorham.

Thunder‘s headline appearance is the band’s only UK festival performance in 2019 and the set will be ‘By Request’, as fans have been invited to suggest songs they’d like the band to mix into the set.

The event gets underway with ‘Four Nations Friday’ featuring Those Damn Crows from Wales, Massive Wagons representing England, from Scotland we welcome The Rising Souls and the opening salvo will come from Blackwater Conspiracy hailing from Ireland.

Officially the UK’s highest music festival, The Steelhouse Festival will once again be held in the spectacular surroundings of the southern edge of the Brecon Beacons, and bring the finest classic rock artists to the heart of the South Wales Valleys.

Aiming to be the UK’s best value rock festival, and a true family friendly event, the Steelhouse Festival popularity grows [glamping is now fully sold out] and the  legend goes on.  See you at the top of the mountain; wherever you’ve come from!

Previous article
HAVE A LUCA AT ROB
Next article
OH GOSH