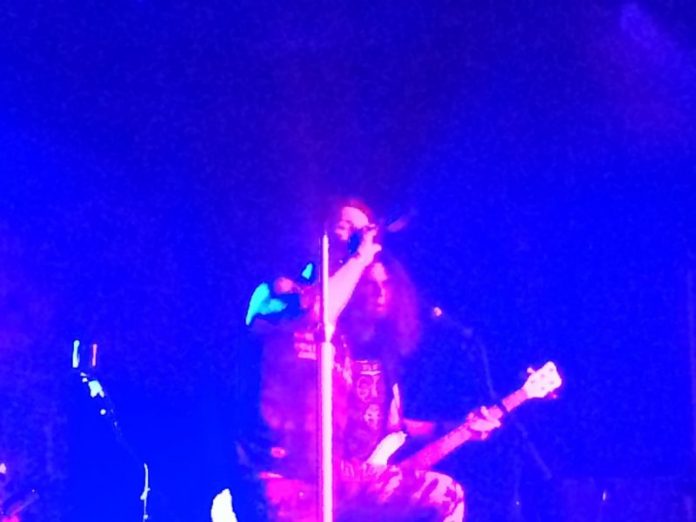 From marriage proposals to oom-pah dancing, the night that kept on giving

You’d best be ready to bang your head when Striker are in town. Working on the basic principle that music should only be heavy and metal, there is an innocence and charm about songs like “Out For Blood.” They might be from Edmonton in Canada but they’re feeling the English springtime cold, illness means that singer Dan Cleary allows the rest centre stage for the million miles an hour instrumental “Escape From Shred City”. Although under the weather Cleary hits the high notes – and there are many – on “Born To Lose” from their new album. Even by the breakneck speed they deliver their other tunes, they slip into overdrive for the last two. The appropriately named “Full Speed Or No Speed” and the fists in the air fury of “Fight For Your Life”, which is good enough to get the singalong treatment. Fast fun. And these striker’s are bang on target.

16 years into their career might be a bit late to be making an appearance in the Black Country, but for Thunderstone it’s a case of better late than never. What the passage of time has given the Finns is a wonderfully tight way of playing and a back catalogue that is the envy of many.  Compressing that history into 45 minutes here means a set of many textures. “Veterans Of The Apocalypse” and “Tool Of The Devil” give a two punch combination at the start, but it is the massive power ballad of “Weak” – played with the lights off and with the venue illuminated by mobile phone torches – that really hits home. That is, until the end and the real standout, “Until We Touch The Burning Sun” which sounds like it has no interest in being constrained by the confines of The Slade Rooms. Epic done right, Thunderstone’s lightning visit was mighty.

26 years of gig going prepares you for most things. But even MV sometimes witnesses a first. Tonight, a man proposed to his girlfriend just before the gorgeous ballad “Tallulah” (she said yes by the way). Which if nothing else shows the esteem in which Sonata Arctica are held.

If it sounds a little twee to call them the kings of melodic metal then it doesn’t stop it being true. They proved it yet again on last year’s environmentally concerned “The Ninth Hour.”

A lot of that opus is played tonight. They kick off with two from it: “Closer To An Animal” and the uplifting “Life”, but the folk stylings of “We Are What We Are” come alive brilliantly here.

A little like the previous band, SA have built up a considerable back catalogue, and even with only 100 minutes here, there is no denying the class it contains. “The Wolves Die Young” and “Full Moon” are from the heavier end, but the band are such skilled musicians they can deftly move into epic mode – which they do on “Among The Shooting Stars” and the brilliant end to the main set “The Power Of One.”

Centrepiece of the three-song encore is a superb “I Have A Right”, which is sandwiched in between two tracks from their classic 2004 “Reckoning Night” record. “Misplaced” plays something of a second fiddle to “Don’t Say A Word” and almost as if to prove things aren’t quite as earnest as they appear throughout a weighty set, the “Vodka Outro” as always brings the curtain down, but not before Wolverhampton has an Oom-Pah dance.