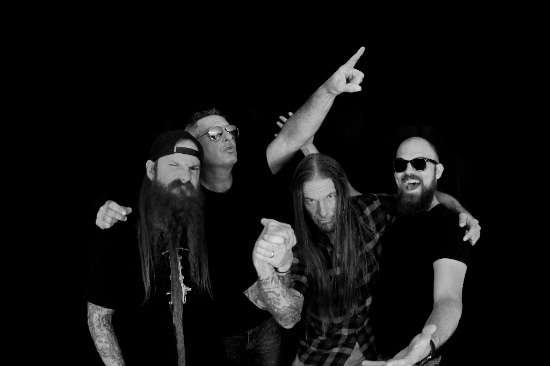 What started out as a simple partnership quickly gained momentum and turned into something considerably more when Steve Earle (Afghan Whigs, Hermano) stepped in on drums and former Valley Of The Sun bassist Ryan McAllister was invited to service the low end. After only a few weeks it was obvious that something pretty badass was happening and since setting off on that one-way track, Moonbow have become a serious force to be reckoned.

With their line-up complete they immediately got to work on their debut album, The End Of Time. Due to McElfresh’s constant touring and Bischoff’s stint on reality TV show Survivor: Caramoan, the album was eventually released in 2013 and immediately gained traction both at home and abroad, securing international distribution after a successful Kickstarter campaign. Giving a nod to countrified roots and arid desert jams, The End of Time not only featured some of the meatiest riffs to ever come out of Kentucky, but also guest vocals by the legend John Garcia. Informed by McElfresh’s fuzz-savvy guitar playing, Earle’s deft skin work, McAllister’s distorted Rickenbacker groove and Bischoff’s unique take on songwriting and storytelling, the album showcased a band that were only just getting started.

In 2015, the quartet went on to release an acoustic follow up entitled Volto del Demone and with new album War Bear – their first outing for the California-based record label Ripple Music – it’s safe to say that their time is most definitely upon us.

War Bear will be given an official worldwide release on 21st April 2017 via Ripple Music.