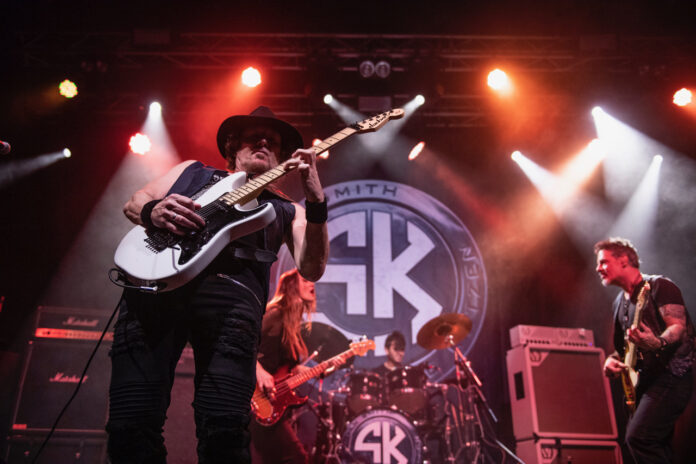 It’s been far too long since I saw The Dust Coda (even allowing for the pandemic and all that). It’s been two and a half years. In that time they’ve released the sensational “Mojo Skyline” record and, on the evidence here – granted they are afforded just half an hour – they have become an even better band, which, considering how good they were to start with, is a mighty statement. “Let Me Go” thunders, and frontman John Drake roars these lyrics. What is pleasing for me, as a fan, is to see them going down so well with a huge crowd, because they deserve it. The new songs from “…Skyline” have fitted in brilliantly too, as “Breakdown” proves, and the fact that they are able to switch tone so well is shown on the ballad “Sweet Love”. Ending with a couple from the recent record, in “Best Believe It” and “Limbo Man” is indicative perhaps of their confidence in the material. The latter has received well over 1.5m plays on Spotify, which granted probably gives them about £7, but there’s plenty of business on their merch table which I am sitting by. This is a set which suggests there’s determination in The Dust Coda, and one which shows that they could be ready to move into the big leagues of British Rock.

Shall we start with the obvious? Sometimes you have to.

So, in the encore, Smith/Kotzen merrily romp through three songs. One is “You Can’t Save Me” – a Richie Kotzen tune – and then they do “Wasted Years”. One of the most popular (and best) songs from the greatest metal band in the world. After this, the last one is “Running”, which as Richie Kotzen explains “was the first song Adrian and I wrote together”.

Those two covers are the only two of the night. The last one seems even more important, which is why I started the review like that, because rather like two divorcees that are newly dating, Smith/Kotzen comes with baggage, but they also have a desire to forge something new.

And it would be perfectly possible to watch this band without knowing who they were and still understand you were watching something brilliant.

This rich creativity has seen them make a full length record and an EP thus far, and most of it is played here. “Taking My Chances” and “Better Days” are fantastic, and “Glory Road” is darker, but what they are not is cold, clinical exercises in guitar playing. These are technically brilliant guitarists, but throughout their career (even on Kotzen’s early solo albums) the songs come first.

When they do let themselves go a little, its fun, “You Don’t Know Me” is a bluesy romp, and “I Wanna Stay” slows things down to be a real power ballad, and the arc of this show moves things up a gear with “Scars”, which sees them play some absolutely mighty twin guitar.

The band too, is really from the top draw. For this tour – their first – they have recruited Julia Lage (Kotzen’s wife) who underpins things with her energy and bass and drummer Bruno Valverde (from the band Angra) and that in itself has given these songs a brand new dynamic.

The four are able to make this into a real classy rock show in the way that many bands at this stage of their career would not and when the hands go up into the air for the set closer “Solar Fire” than that surely vindicates the decision to take these songs and this band on the road.

The encore is merely the icing on the cake, if you will, but it’s the show in microcosm too. Let’s be honest here, they probably don’t need to do this (although both throughout their career whether its Smith in Primal Rock Rebellion or Kotzen in Winery Dogs for example, have shown a desire to expand the boundaries) but they not only need to be on this stage, but love to be as well, and that sense of fun, as much as anything, shone through here tonight.

All photos by John McMurtie